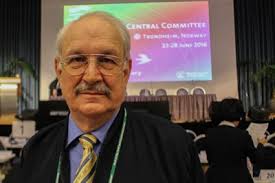 Georges Lemopoulos, member of Ecumenical Patriarchate of the Orthodox Church of Constantinople, former Vice-Secretary General of the World Council of Churches (WCC), remembers Chiara Lubich. He is currently responsible for the preparations for the 70th anniversary of WCC which will be held in 2018.

During the “The Pilgrimage for Justice and Peace”, which profoundly marks the nature and work of the World Council of Churches, Chiara Lubich was recalled by many as someone who was a companion of a journey in a way that was trustworthy, determined, full of creativity and fascination. 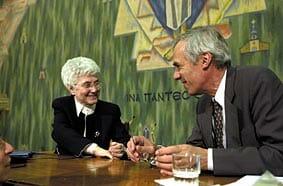 Geneva, October 2002: Chiara Lubich and Dr Konrad Raiser, who was then Secretary-General of WCC.

Her passion for proclaiming and living the Gospel in everyday life, her charism, her spirituality, founded primarily on Jesus crucified and abandoned, her ability to mobilise everyone with her enthusiasm not only religious leaders but also young people, Catholics and members of other Christian churches, the faithful of other religions, her sensitivity to economic and social injustice. All this has been a source of inspiration and encouragement to those travelling along the path of ecumensim.

Chiara visited the World Council of the Churches twice (in 1967 and 2002), and on several occasions had meetings with the leaders of WCC. This relationship between the WCC and the Focolare Movement continues today in various forms: through meetings, joint initiatives and projects, mutual participation in events that mark the lives of the two ecumenical organisations, with gratitude and knowing that Chiara, through her precious heritage and her exhortations, continues to guide their steps, to encourage them and to support them in their common goals.”