After the Visit of Francis 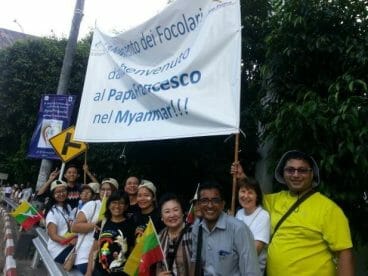 Peace, respect for the dignity of every people, and dialogue were some of the lofty goals left by Pope Francis to the populations he visited during his recent trip in Asia.

Testimonies from the Focolare community have begun to arrive from Myanmar in recent days where, together with others, they were involved in taking care of different aspects of the trip – things like translations, maintaining order, health care, and the orchestra.

Here are a few of the reports: “Pope Francis’s coming was a dream come true for us. It took a while for the amazement to become conscious awareness of what was really happening.”
“The tears streamed down the cheeks of the elderly. But also the youth, for whom it was more difficult to grasp what was taking place, were overjoyed.”

The small minority of Catholics in the country felt encouraged: “We were a little flock and isolated. Finally we saw our shepherd up close. These people are no longer on the margins, but under the world spotlight. Finally something happened to be proud of. The Pope is in Myanmar.”
“We don’t have to be afraid of anything anymore.” 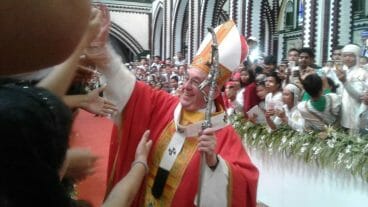 Gennie works with Internally Displaced Persons (IDP), civilians who are forced to escape persecutions and, unlike refugees, haven’t crossed international borders. In the majority of cases, while waiting for a new life, they’re deprived of help and protection.
After Pope Francis’s visit, she writes: “Today this hope is renewed. “My own personal hope is in Love, and from now on it will be more and more alive in me.”

“On November 28 we left with a group of a hundred people from the farthest villages of the country. We travelled in at least five buses. “The trip was organized by our parish. Seeing the Pope was like a dream for us. We left at nine o’clock in the morning and travelled for ten hours. We were full of enthusiasm, we prayed and sang. We took a short-cut, but it took all of us around twenty hours to get there because we didn’t want to let our friends fall behind and be on their own. But nobody complained about that.” 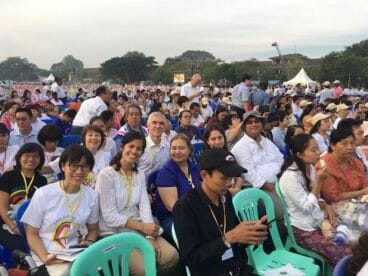 The group reached Kyaikkasan Ground of Yangon at around 5:30 in the morning as Mass was about to begin. It was attended not only by the small Catholic minority, but also by Muslims, Buddhists and faithful of different religions.
“Our group couldn’t get in, but we found a spot near one of the entrances. Through the Pope we were able to feel the Church’s love for the smallest flock. You could sense a very strong love also among the whole population, not only among the Christians. Our taxi driver told us that he had been driving people for free to the stadium since early morning, and that the public trains were doing the same.”

One Buddhist youth, who had just attended the Mass, wrote: “Here too I felt I was in a family. I notice a deep peace in my heart.” 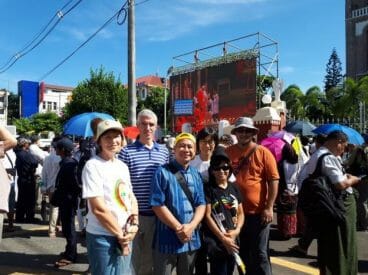 Gennie continues: “The new criteria that should be observed from now on are totally topsy turvey and new: the VIPs are all there in the Magnificat . . . He has raised up the lowly . . . filled the hungry with good things.” “We have to thank everyone for this experience – the Yangonians, who were always so patient with the crowd; the people who prepared the event, but especially Pope Francis who made the decision to come to such a far-away land. It’s a new daybreak for Myanmar.”

Valentina is a medical doctor. She and other doctors lent their services to help with the health care. “It was an occasion that put us together, without borders. We Catholic and non-Catholic doctors worked straight through and were very tired, but we received a sort of grace, that of being able to love without stopping.”
Jerome worked as a translator: “For me it was especially beautiful to see the youth waiting from early in the morning at the Cathedral of St Mary in Yangon. At the end of the Mass the Pope turned to us with lots of encouragement for us to work or peace. I now feel called to greater generosity, to be joyful and brave as he asked us to be.”