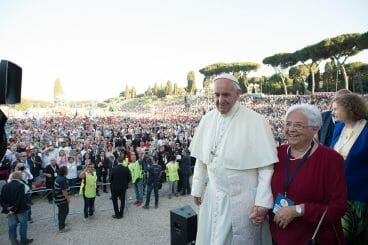 The special end-of-the-year article-interview of the magazine edited by San Paolo entitled, “Women, the future of the Church?” by Alberto Chiara is a two-page article with many photos. But during the interview the discussion broadens, ranging from the role of the woman in the Church to the challenges opened by the pontificate of Francis to go towards the poor and the marginalized, up to the commitment to dialogue with the new generations, which will be the focus of a dedicated Synod in October, to be preceded by important pre-Synod events.

Will the women save the Church? “Jesus Christ has already saved the Church,” Maria Voce briefly replied. “What counts is what the men and women of the various communities do.” The journalist prodded on, recalling the recent appointment of Pope Francis, in two key Departments – that for the lay and the one for family and life – of two women, Linda Ghisoni and Gabriella Gambino, both married and with children, (the first, a university professor and magistrate of the Court for marriage annulment proceedings in Lazio, and the second, a professor of Bioethics and Jurisprudence at the Roman University of Tor Vergata and of Sciences of Marriage and the Family at the John Paul II Pontifical Institute).  “It seems that Pope Francis has the firm intention of affirming an authentic, real rapport of complementarity between woman and man,” Maria Voce replied. “Of course, this rapport has always existed. In the beginning God created man, male and female. He created two essentially different beings which, together, make up humanity.” After so much machismo is this the payback time of women? «Pope Francis wants the women, like men, to have the possibility to express themselves within the Church, also taking on roles of greater responsibility, but without crushing man, but rather, by bringing out their own talents, that particular capacity for regeneration and maternity. No payback, therefore, even if women up to now have not had enough room, in the Church as well as in society.”

As to the Church’s state of health today, Maria Voce commented: “I am really happy to live in our time, with this Church. There couldn’t be a better moment.” And added: “The characteristic trait which is most convincing to me is the “basic serenity that marks the rapport between the Pope and the people of God. Francis is a Pope who is always generous in welcoming others, ready to open out to and attentive in understanding the difficulties of humanity. He doesn’t hide the difficulties of the moment, also within the Church, but every era has its difficulties, and our days are not exempted to this rule. Several times I have thought of how much Pope Bergoglio must suffer in feeling misunderstood, and criticized severely for his words interpreted out of context…” Having to choose, first one, then two words that define the current pope, the Focolare president indicated “charity” and “truth,” but specified: “One does not exclude the other. Bergoglio knows that some things he says or does may bother some people and may not be fully understood by all. But he goes on, driven by love, to improve and correct certain situations.” With regard to the sectors preferred by the Pope, Emmaus observed: “The insistent focus of the Pope on the poor, the sick, and the marginalized, and his capacity to bend down towards those who make mistakes, does not make him overlook other categories.”

In the face of a Church that is always more open to dialogue on the same level with all, Maria Voce expressed a dream: “That the Pope promote a day of common prayer and invite the heads of the other Churches, Orthodox, Anglicans, Lutheran, Methodists, Baptists… to pray together once a year, during the Week of Prayer for the Unity of Christians, or at another time. I think that if the faithful see their heads pray together habitually, they would discover the possibility of unity in diversity.” The end of the interview was dedicated in a phrase to the youth, to whom the Church intends to dedicate itself this year with particular attention: “We adults should listen to them.”