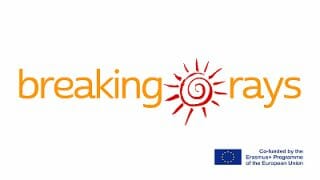 “Breaking Rays” is a play on the words “Breaking News” which are used to describe the interruption of some latest sensational news story. The sensational news this time was a project for the promotion of fraternity and a group of young communication workers who, with passion and skill, are stepping up to produce some maximum results. Breaking Rays aims at building an international network where experiences inspired by the charism of the Focolare Movement can come out of isolation and “break” onto the global scene, creating a widespread domino effect in other communities.
Co-financed by the European Comission through the Erasmus+ and promoted by the international New Humanity Association in collaboration with CSC Audiovisual Centre, Italy, and other NGOs, the project is for young filmmakers and collaborators of the bi-monthly telephone CH Link-Up with news of the Focolare Community around the world. They already got through the first and second stages in Castelgandolfo, Italy, last July; and at Mariapolis Ginetta in San Paolo, Brazil on February 3-10. The next and final stage will take place concurrently with the Genfest, July 2018 in Manila, Philippines.

Twenty young people from different countries (Brazil, Italy Hungary, Indonesia, Philippines, India, Kenya and Burundi) have already arrived in Mariapolis Ginetta with a variety of skills, to be coordinated by professional tutors: Italian film director from RAI-TV, director of photography, Carlo Sgambato, project director, Kim Rowley from CSC audio-visuals, along with Isabela Reis, producer and curator of cultural audio-visual projects. With them there is also Paolo Cipollone from CSV Audiovisuals and coordinator of the project. Theoretical and practical training, along with experimenting with new techniques will alternate with work and a common life that will support a communion of talents and openness to constructive criticism. The group has made several visits to social projects of the region, making videos and interviewing. During other sessions, several experts in the field of communications (dreicting, television and radio journalism) have told their own experience and answered questions from the participants.

A unique experience in which to learn and go deeper into the profession of a journalist from a new perspective,” said Lewis from Burundi. “More than a course on film-making, powerful stories shared about how to make a better world,” said Donald from India. The team and experts helped me to develop an eye for detail and how to shatter stereotypes and cultural cliches, using audiovisuals.” Full-time tutor Isabela Reis from Brazil explains: “I think it’s a project we can be proud of. It was a strong experience that engaged us for eight days. It was useful for improving the ability to communicate among the young people. It was also important to discuss the various ways of taking advantage of the possibilities offered by technology.” Rafael from Brazil has been in Manila for several months helping to prepare the Genfest: “An important step towards Manila. It was beautiful to spend a whole week in contact with such incredible professionals. Their videos spread hope.” Kyle Venturillo from the Philippines: “We come from different parts of the world. We have different languages, cultures and personalities. In spite of this, we were able to establish a relationship of openness among us, which turned us into a family. We’re a group of people “a bit folly,” with different thoughts and perspectives, but with one main objective: to make this world more united.”