The great attraction of our times 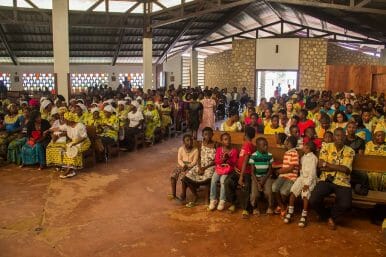 March 14, 2018 marks the 10th anniversary of Chiara Lubich’s passing away. Focolare communities throughout the world will commemorate this anniversary through a varied number of events that mark the charism’s contribution to social change.

On March 3, 800 people are expected to participate in a conference held at Maria Hall of the Catholic University Hospital in Seoul, Korea. “Mary: a ‘yes’ that changes society” is the theme chosen for a meeting to be held on March 11 at Goma, Democratic Republic. Of Congo. A conference on “Chiara Lubich: a life of dialogue for peace” is scheduled to take place also on March 11, at Chicago, USA. “Conoscenze plurali” is the title of the convention which will take place on March 17 at the Salone dei Cinquecento of Palazzo Vecchio, in Florence, Italy.  On March 18, a multi-ethnic day of social action is being organized in a tribal village at Chiang Mai, Thailand. A day’s meeting on “Chiara Lubich and social actions” will be held on March 24 at Chisinau, Republic of Moldova. These are some of the many initiatives planned.

A 360º overview of the social dimension of Chiara Lubich’s charism will be presented through an artistic event scheduled for March 3, at the Mariapolis Centre, Castel Gandolfo, Rome. 2000 participants from the five continents are expected to attend. The Secretary of State, Cardinal Pietro Parolin and personalities from the fields of culture, communication and institutions are also expected to be present. This event can be followed in English, Spanish, Portugese, French and Italian via internet (http://live.focolare.org/chiaralubich/). 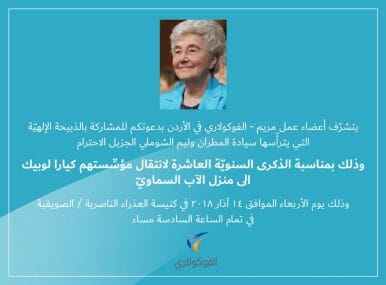 For Chiara Lubich, the greatest attraction of modern times was “to penetrate to the highest contemplation while mingling with everyone, one person alongside others”. Sergio Zavoli, who was a very close friend of Chiara, defined her as a mystic of unity between heaven and earth. While speaking about the change she brought about in Trinitarian mysticism, he said: «Allowing God to dwell in the intimacy of one’s soul is making him live among men through communication between – I repeat her words – God in me and God in my brother. It is not by chance that Chiara Lubich’s thought appeals to us to put together the fragments of the inseparable, that is man, and to recompose the fractures of what is shareable, that is the community».

Since the very beginning of Lubich’s experience in her native city of Trent, the social change that stemmed from her thought, gave rise to initiatives that have a very strong social hallmark. Today, these actions and works are found practically in all the world; they have the characteristics of each region and culture and they seek to give an answer to specific situations of individuals, groups and communities in need (see link).

When confronted with the question about the Focolare’s focal aim today, ten years after the death of its founder, Maria Voce answered that the Movement “must definitely maintain unity with its source, that is Chiara, hence fidelity to the charism as originally passed on; it must return to its beginnings to discover the radicality and totality required from us, may be even more today. The Movement has to be developed so that it can be that instrument designed by God to spread the spirituality of communion and build the unity of the human family. It has to deepen its knowledge about the great charism God entrusted to Chiara and about ways of transmitting it to everyone, since besides its spiritual aspects, the charism has also doctrinal, social and political ones that can influence all areas”.

Maria Voce expresses her conviction that today’s visibility of the Focolare Movement, where incidence on human and social realities is concerned, albeit good, “is still too localized”. Then she affirms: “I think that this visibility needs to be more effective and more extensive. May be the Movement needs to become more known even on a worldwide level. We are present almost in every country, but this, perhaps, is not evident enough. It will happen through our life: the more we live according to the charism, the more we will influence the world around, and hence become more visible”.