Chair of Ecumenical Studies at Sophia 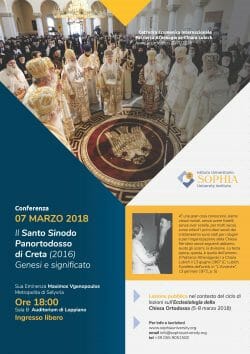 The Patriarch Athenagoras – Chiara Lubich Chair of Ecumenical Studies at the Sophia University Institute has launched its first course. The official inauguration of this international Chair of Ecumenical Studies took place last December14, at the Sophia University Institute of Loppiano, when both Pope Francis and the Ecumenical Patriarch Bartholomew I sent messages of best wishes and encouragement. The first set of lectures, on “The Ecclesiology of the Orthodox Church”, will be held from the 5 to 27 March. His Eminence Maximos Vgenopoulos, Metropolitan of Selyvria and Prof. Piero Coda are the co-directors of the course.

This Chair, unique in the international and cultural academic scene, came into being 50 years after the first meeting between Patriarch Athenagoras I and Chiara Lubich. It wants to manifest and focus its attention on the legacy that emerged from that meeting, when the Patriarch confided to Chiara: “It is great getting to know each other; for many centuries we have lived in isolation, without brothers and sisters; we have lived like orphans! The first ten centuries of Christianity were centred on dogmas and the Church’s organization. In the ten centuries that followed we had schisms and division.
The third epoch, the present one, is that of love ”.

In his opening speech on March 5, Piero Coda, the Dean of Sophia, referred to the specific methodology of the Institute, which is based on the commitment to live mutual love as defined by Jesus’ new commandment. And he affirmed: “We want to prepare ourselves with competence and awe to be servants and witnesses of an ecumenism that gushes from the Trinitarian love, source, pattern and goal of unity in the richness and beauty of diversity. This is the only way that empowers us to receive reciprocally the gifts drawn from the priceless treasures of our Churches’ Traditions and offered to each other. This is the only way we can bridge with love the distances that still separate us.
T his is the only way we can enrich ourselves reciprocally; the only way that, with the help of God’s grace, we can achieve full and visible unity”.

When one considers the political, social and religious instability in Middle East countries and in the Mediterranean region, this Chair assumes cultural and social importance on an international level, even through the opportunities of study and research it offers to the young generation.
Its specific aim is to study the cultural meaning, to review the historical stages and analyse in depth the existential and social implications of the ecumenical journey towards full unity among Churches, while exchanging spiritual, theological and cultural wealth of Christians, both in the East and West. Besides, it wants to offer academically qualified courses to those interested in contributing, through thought, dialogue and life experience, towards promoting unity between the Orthodox Church and the Catholic Church. And thus offer a service towards the encounter between peoples and cultures.