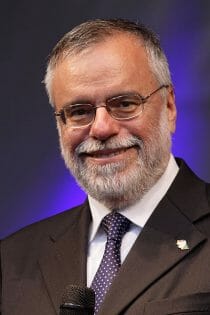 We meet Andrea Riccardi, founder of the Community of Sant’Egidio, at Castel Gandolfo, not far from the Mariapolis Center there. It feels like a holiday, since hundreds of people (in the end they will count close to 2,000) are flowing toward an event on the occasion of the 10th anniversary of Chiara Lubich’s passing. Outside the door of the small hall where we meet, there are many festive voices.
“Ten years later, as we return to Chiara Lubich, it is not a return to the past, like archeology,” says Riccardi. “It’s not even a sentimental memory, as people can have for someone who was important in the Church. “But,” he confides, “It is certainly something important in my life.”
He mentions the pivotal years in Europe, when democracy was returning after a century-long interruption, when the walls and iron curtains were being dismantled.
“I think that Chiara’s message is even more relevant today than it was during the Cold War or in 1989. Today, in this global world, her message speaks of the common destiny of all of us, of the unity of peoples and the human family. Yet it is not a sociologist’s typical message, but a profound one, given that Chiara was a woman who was able to summarize as well as go into depth, to analyze and communicate simply.

“Today we need a message of unity, because this global world is not united spiritually. Patriarch Athenagoras, a great friend of Chiara, said, ‘The world is unifying, but there is no spiritual unity.’
“And Chiara tells us that this world can be united, rich with poor, those nearby with those far away, those native to a place with those who have just arrived. Chiara also tells us,” Riccardi adds, “that we, mere men and women, the young and the elderly, that you too, can change the world. 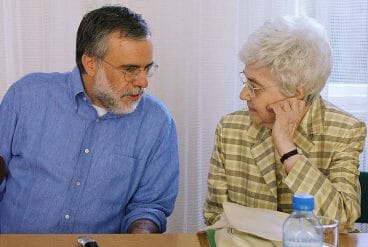 “Chiara was a friend to great people and appreciated by great people. I think of her friendship with John Paul II, who called her his ‘peer, his equal in age.’ But Chiara also showed that the world can change through the least of us who has faith. Like Mary with the Magnificat. “She helped me to understand the value of a charism, because Chiara recognized in me, in the Community of Sant’Egidio, a charism. She had a deep sense of people and experiences of Church.”
Riccardi concludes: “For me Chiara is also a very dear memory of a profound friendship. She was a friend, a friend in the small things, in the attention she gave when she invited you to her table, in the phone calls, in taking care of you.

“She was also someone who saw accurately in important moments for the Church. I think of, for example, of when John Paul II met with ecclesial movements. Chiara said, ‘This was a flash of inspiration from the Pope, a point of arrival that must also become a new point of departure.’
“Today my affection is accompanied with prayerful thoughts with Chiara, for Chiara.”