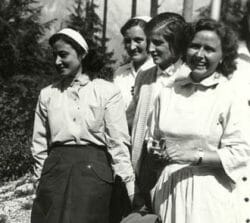 “We’ll never be able to quantify the help that we receive from our brothers and sisters. How much courage their faith inspires in us, how much warmth their love, how much their example draws us!” Chiara Lubich (1920-2008), who wrote these words, was known as someone who drew after her hundreds and thousands of people and constructed relationships with Buddhists, Muslims. She is still being followed by people with no religious affiliation and breatheing new life into politics and economy.

The friendship with the first companions of Silvia Lubich whom they knew simply as “Chiara” or Clare, played no small role. It all began with a choice of God and her consecration to Him in 1943, Trent, Italy. However, quite soon it was no longer a single “I”, but a collective subject that began to move, to act, to pray and to love: Chiara and her first companions could have ended becoming anyone, but they became beacons of light on all five continents.

This story has many incredible elements, but yet it’s simple. You understand it if you open and read in chapter 13 of John’s Gospel: “I give you a new commandment, that you love one another. As I have loved you, so must you love one another” (13:34). This is a commandment that can only be lived out in the company of others. When Chiara and her companions read this Gospel passage in a bomb shelter, they looked at one another very intensely as they thought about the commitment it would be. They didn’t hesitate, but said to each other: “I’m ready to love you to the point of giving my life for you.” Chiara would later consider this the cornerstone on which the entire Focolare Movement would rest. It’s certainly not something unheard of in the history of the Church, but there might be one thing new about it. Chiara immediately conveyed to her companions whatever she was living and all that the Holy Spirit was inspiring in her. The bond among them was stronger than cement, and I would like to illustrate the qulaity of their relationship that valued and freed potentials, edifying a work that was of God. 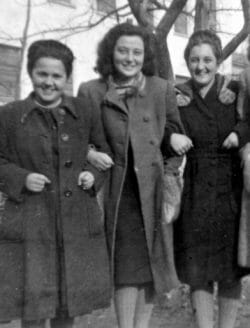 Ten years went by and it was 1954. Chiara was living with Giosi, Graziella, Natalia, Aletta, Marilen, Bruna and Eli. One day, as Chiara paused to look at them, she recalled the sentence from the book of Proverbs: “Wisdom has built her a house and set up her seven columns” (Proverbs 9:1). She was looking at the seven young women in front of her, each with her own talent, all of them united and rooted in God. These were Wisdom’s seven columns, the seven colours of the spectrum that emerge from the one light of Love. Seven interdependent aspects of love, each flowing from and into the other.

Chiara entrusted Giosi with the communion of goods and the paychecks, not only the care of the poor: the red of love. To Graziella she entrusted “witness and spreading,” the orange. Natalia had been her first companion: she personified the heart of this ideal, the cry of Jesus Forsaken of love. She would carry thi secret beyond the Iron Curtain. She was the spirituality and prayer life, the yellow of the spectrum. Aletta would be remembered as the one who encouraged the members to be mindful of their health, and to form a community united in love. Chiara entrusted her with the green, Creation and physical life. To Marilen, who lived for fifteen years in the midst of a Cameroon forest, Chiara entrusted the blue: harmony and the home. Bruna was a bit of an intellectual and Chiara saw her as the one who could develop the aspect of studies: the indigo. Eli was always at Chiara’s side and helped to make sure that all the members around the world were living as one. She was entrusted with the aspect of unity and the means of communication, the violet. Some other of her first companions would also have special tasks: Dori, Ginettta, Gis, Valeria, Lia, Silvana and Palmira. 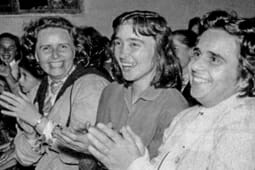 Chiara would explain: “Brotherly love (philadlephia) is more than real among us. This is where I draw strength to face the crosses, besides direct union with Jesus. Here, we each take care of the other, in accordance with the need. Here, we pass from the Wisdom that is shared […] to the practical advice concerning health, clothing, the house, eating and constant little helps. Here, you know that you’ll never be judged but only loved, forgiven, helped… A home atmosphere flows among us here, which is from Heaven. When I want to verify if my idea is an inspiration, if an article needs to be corrected, I read to someone asking them to be completely empty in judging it. They do it and I feel the voice of Jesus magnified within me: ‘This is good, do this over, explain this better.’ I read the text over with them and we find it just as we desire.” It’s no surprise that Chiara wrote the following words as her testament: “Always be a family.”