The “Children’s Home” in Damascus 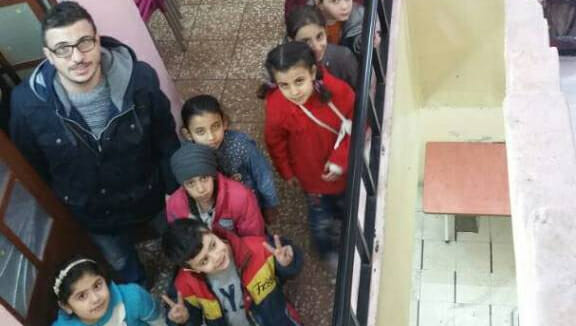 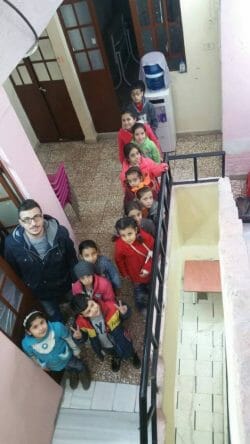 “A bomb exploded a few meters away from my house. I should have been in the place of the explosion to reach my work place. But that day I was ten minutes late. It was a sign of fate.” Her voice was clear, calm, and in perfect French, showing a serenity that contrasted with the sound of bombs and airplanes that alternate in the daily life of the capital, Damascus. Zéna was born in Lebanon 35 years ago, and arrived in Syria last July. A member of the Focolare Movement, she had decided to join the country at war, after a long reflection. In her birthplace, she had experienced the war and bombs. “I kept it all inside me. I was scared. But one day I started to see things in a positive light. I entrusted all to God and came to Damascus with the Focolare.” In the first 6 months she lived under the air raids. “Up to December the raids were daily, but we still managed to continue our lives,” she said, “until that day in January when a bomb fell just a few meters from the house. In Syria, despite the courage of the inhabitants, fear and danger are always close at hand.”

Zéna works for the “Maison des enfants” run by the Movement in cooperation with others, in the poor district of Douela in Damascus. The centre has four classes for 90 children aged 6 to 10. Eight teachers are all young Syrian scholars. “We called it the ’Children’s Home’ because we want to be their family. We receive many requests which we are unable to accept. We gather the poorer children, many of whom have lost both parents or who suffered violence. They need to be surrounded by adults who love them.” In February, the “Maison” had to close for several weeks due to an attack. “It was a terrible moment when the children were asked if they were afraid of the bombings. Most of them answered evasively, rejecting the reality. There is a lot of suffering related to the consequences of the war.” The center reopened at the start of April, to the great joy of the students. “They are really happy to come, and sad when they have to leave.”

Life has resumed in Syria. Now the country is almost entirely under the control of the Syrian government. “During the weekends, the bars are open up to one or two in the morning. The people are stressed, they need an outlet.” Zena lives at the “East Gate– Bab Sharqi” of Damascus, in the old city. Few bombs have fallen in 7 years in the neighbourhood, although the signs of long years of conflict are evident. “Today there is little work. Many young people have gone to Europe or Lebanon to avoid having to do military service, or to find a job. In Syria, there is a ratio of 10 women to 1 man.” The Focolare Movement serenely carries out its mission. “Here the Christians are protected by the government. We are well respected. After 7 years of war, the eastern churches were able to hold the Easter processions in the streets. At the end of the conflict – she continued – precisely the Syrian people will be the ones to rebuild the country. The worksite is enormous. Damascus is not destroyed but the damage is immense in the Aleppo and Homs regions. The Syrian lira has lost most of its value and many wealthy families have become poor. The elite have disappeared, and there are only people in great need. How do the young graduates find a job? Despite this, many have remained. They believe in the restoration of their country.”

Before the physical reconstruction and economic recovery, Syria will have to uproot the armed conflicts in its territory. Zéna is convinced that the end of the war is near. “If there are no external interventions, I’m sure that the war on Syrian soil will be over before 2018 ends. We have to restore work and dignity to the people. I really hope that little by little, the enterprises will return, and so will the tourists. We have to give a new motivation to the Syrians, starting from the children who are the pillars of future society, and “Her” children, precisely. Today it’s Zena’s turn to prepare lunch. Every day I come to work with incredible joy.”