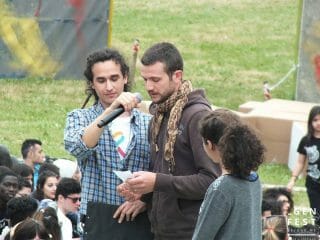 “My family is Christian and refuses to kill or carry weapons,” says George, a young Syrian from Homs. We’re in Loppiano, the Focolare international town near Florence, Italy where hundreds of young people from all over country have gathered for a meeting that include testimonies, sharing and much festivity. This year the event was held in anticipation of the much larger international Genfest, which will be heldnext month in Manila, Philippines (http://y4uw.org/it/events/genfest-2018/).

The May 1st gathering was the Italian edition where 3700 young people took part in a one-day celebration of fraternity with reporting on projects, social action, personal experiences in which people came face to face with the personal dramas and pain of humanity. As in the case of George and Michael who left everyone breathless with their description of what they have been experiencing for years years in Syria. “We’ve seen many people die,” says George. “For a period of time I even had to carry a knife to protect myself, to defend myself in case of danger. Years of hatred, death and loss of dignity had emptied my heart and I began to think that love didn’t exist. Only the Mariapolis was able to remove this thought from my mind (several days spent living in the light of the Gospel, an annual gathering of the Focolare). After that Mariapolis I never carried a knife again and decided to start responding to hatred with love.” The final appeal to the young people was strongly embraced: “Don’t complain about your life. It’s beautiful, you just don’t realize it.” 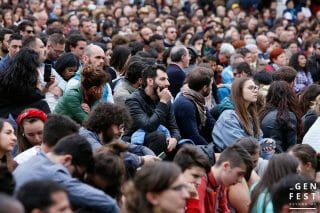 The conducting thread of the event, which was entitled “Beyond Me”, was the desire to go beyond one’s limits and boundaries in order to bring about a personal and, especially, a social change. Roberto Spuri and Elena Sofia Ferri bore witness to this as they told about the experience of the earthquake in Central Italy; Alessio Lanaloni and Maria Chiara Cefaloni, with their efforts for a disarmed economy; Alessandra Leanza, with the experience of volunteering with Rom children in Sardinia. And Marco Voleri, the internationally renowned tenor and founder of “Sintomi di Felicita” which promotes public awareness of multiple sclerosis; Simone Barlaam, para-olympic swimming champion at the Mexican world games. Michele Tranzuilli, author of the book Una buona idea and promoter of the bridge with Africa YouAid; Sara Fabris, painter. 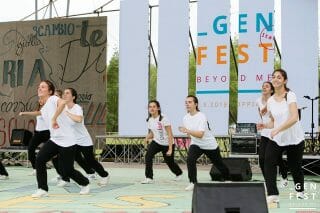 Projects. All the stories that were told at Genfest-Italy were connected to concrete experiences: an association, a social project, which anyone could “adopt” in the coming year. This was the call to action that was launched at the end of the event with an invitation to each young person to choose a project and replicate it everywhere else. To facilitate their work, the associations that are actively engaged in the cities of Italy posted links on the United world project website, according to region.

Genfest Italy concluded with a city that “flying” city, a city that was depicted in the final choreography that was based on a meditation by Chiara Lubich: “One City Is Not Enough:” “For God, one city is too little. He made the stars, guided the destiny of Time. With God you can see farther, to everyone’s country, to the whole globe. At the end of life let us not have to regret that we loved too little.”

Loppiano is getting ready to welcome Pope Francis on May 10th, and it wasn’t by chance that a group of young people from Nomadelfia was at Genfest Italy bringing the greetings of their community, which will also be visited by Pope Francis on the same day. As we prepare to welcome him our friendship is growing and intensifying.