Be promoters of a culture of encounter 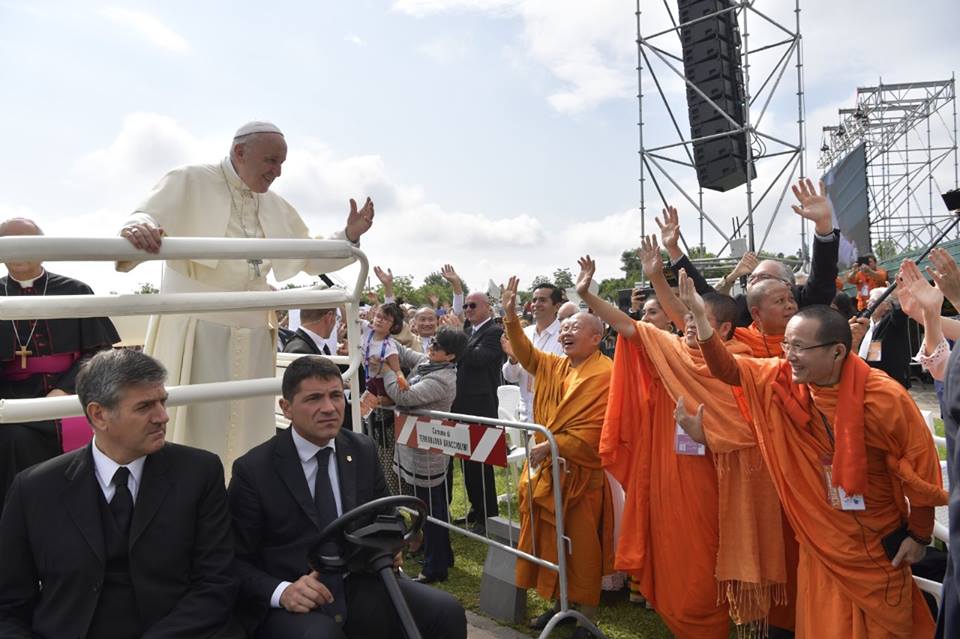 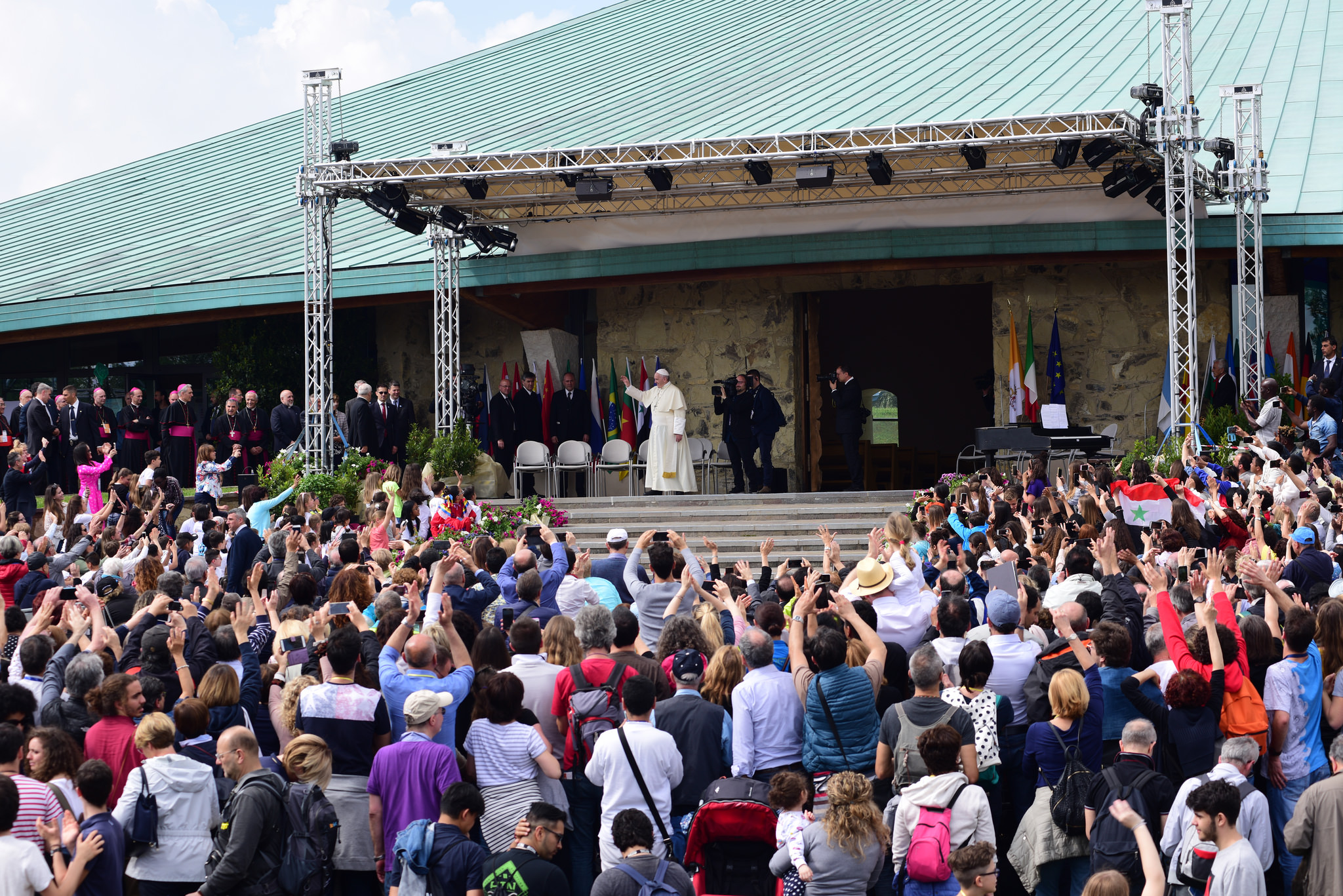 “I want to raise my gaze towards the horizon and ask you to do it with me, and with trustful fidelity and creative generosity, look to the future which today has already begun.” Pope Francis is the first Pontiff to visit Loppiano, the town of the Focolare Movement close to Florence. In this first visit, the Pope launched a challenge to the community present, the universal Church and the entire humankind: “Build a shared culture of encounter and a global civilisation of alliance.” It must be a culture that responds to the divisions of these times, marked by growing poverty and the drama of forced migration.
“In the changing epochs we are undergoing” – the Pope observed, “in fact – we have to commit ourselves to the tracing of new paths to pursue together, and we need men and women, youths, families, and people of all walks of life and professions who can measure up to this task.”
From the front stairs of the Church dedicated to Maria Theotokos, Mother of God, where 7,000 people were present, being spiritual sons and daughters of Chiara Lubich, founder of the Focolare, the Holy Father proposed the challenge of a “creative fidelity: being faithful to the original inspiration and also open to the breath of the Holy Spirit, and undertaking with courage the new paths he suggests.” 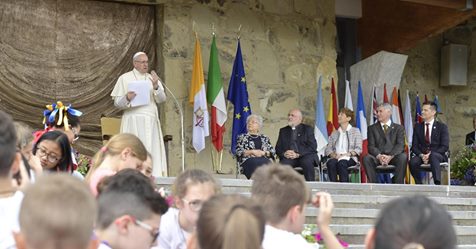 To do this –Francis observed – we need “humility, openness, synergy, and risk capacities.” Then we have to put “community discernment” into practice, that is, “we have to listen to God, to the point of hearing with him, the cry of the People. We need to listen to the People to the point of breathing the will to which God is calling us.”
It is a demanding commitment which calls for faithfulness even when the enthusiasm of the beginnings give way – for the movements – to the quest for new paths to the actualization of the charism. In answering the questions of the Focolare, the Pope cited St. Paul and invited all to focus on two key words: parresia and hyponomè. The first expresses “courage and sincerity in bearing witness to the truth, and with the faith in God and his mercy,” the antidote for “every false fear, and every temptation to hide behind the quiet life, in respectability.” The second translates into perseverance in “challenging situations we come to face in life,” and finds its fundaments in the awareness of the love of God which “makes us capable of living with tenacity, serenity, positivity, imagination… and also a pinch of humour.” 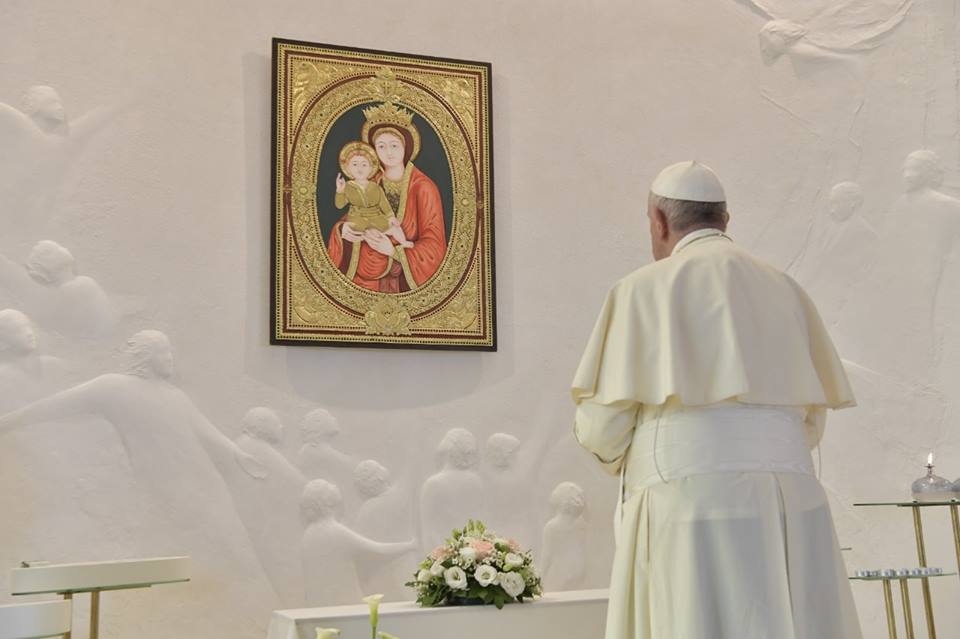 The Pontiff then invited all to recall the memory of the first days, when Chiara imagined Loppiano as “a piece of new city in the spirit of the Gospel,” an expression of a people united in diversity and its heart in the Eucharist, being the source of new life. It is a people which the Pope exhorted to go forth “to cast the yeast of the Gospel into the dough of society,” especially where there is poverty, suffering and research. “The charism of unity – he said – is a providential stimulus and a powerful aid in living this evangelical mysticism of the We.”

But the renewal of culture cannot but require new education. In Loppiano, which started also as a city-school with study centres like the Sophia University, the Pope exhorted the inauguration of an “educational pact” founded on dialogue and proximity, to “exercise together the three languages: of the head, the heart and the hands.” In this – he added – “it is important that there be in Loppiano, a university centre for those who seek Wisdom, but which also sets as an objective, the construction of a culture of unity”: a “frontier” academic experience.
But it is above all Mary – concluded Francis– “that is the school to attend (…) to learn how to know Jesus, and to live of Jesus and with Jesus: do not forget that Mary, the first disciple of Jesus was a lay person. She is the woman of faithfulness, courage, parresia and patience.”
In the city of Loppiano, the Pope’s invitation echoes the intuition of Chiara Lubich, the “foundation stone” of the Work of Mary, and resounds to consolidate a path: “Our wish” – these are the words of Maria Voce, President of the Focolare – “is that whoever visits this town can find a home, a family, a mother: Mary! It is she who educates and inspires every expression of the social life of the Focolare Movement (…) It is she who in the Magnificat indicates to us a programme of life and action and pushes us to throw open wide, the doors of the heart towards all those who suffer, seeking happiness.” 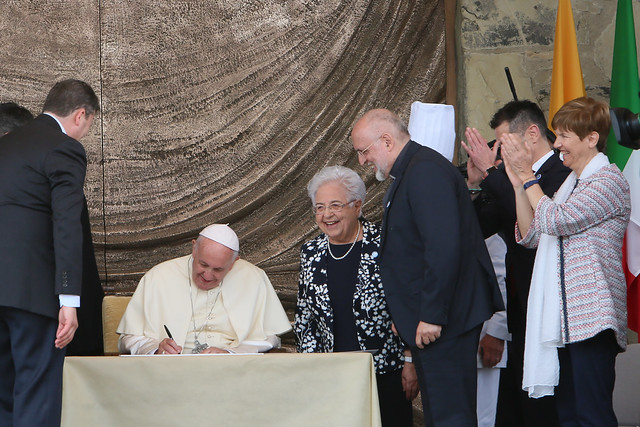