The road to Dublin 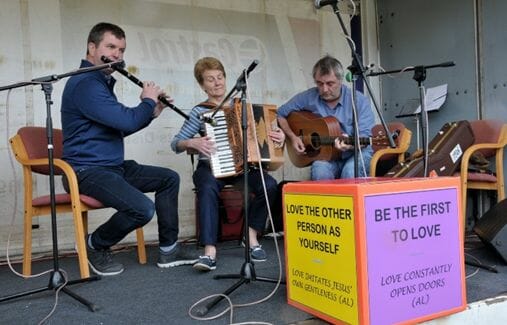 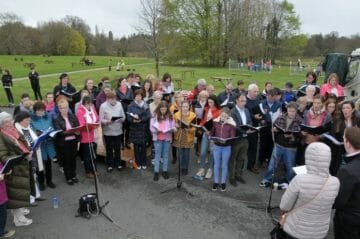 Lough Key Forest Park is close to 2,000 acres of silence, natural paths, majestic cedars and a lake on the south coast oif Lough Key, 25 miles southwest of Sligo Town and 2 miles east of Boyle. This was the setting for a day for families organized by the Diocese of Elphin at the end of April. In collaboration with Bishop Kevin Doran, one of the promoters for the event was the Focolare Movement. “All are invited to an atmosphere full of play, sharing and friendship,” the bishop had said, “including families of other religious denominations, neighbors and friends.”

The goal was to prepare for the main event with Pope Francis in the Irish capital, which will bring together families from all over the world at the end of August. The theme will be “The Gospel of the Family: Joy for the World.” Every three years, this international event puts the focus once again on Christian families, as cornerstones of society.

Following the opening on August 21, which will be held simultaneously in all the Irish dioceses, there will be an international conference in Dublin for three days (22–24), featuring experts from various parts of the world, experiences, workshops and activities for children and teens.

With the Holy Father’s arrival on August 25, there will be an immense festival for families, a chance to hear music and experiences from the continents, as well as, naturally, long-awaited words from the pope. Pope Francis will celebrate a solemn Eucharistic service on the 26th at Phoenix Park in Dublin, which will close the event. “We aren’t many in this part of Ireland,” the Focolare community writes, “but we wanted to respond to the bishop’s invitation.” For a year now, Ireland has been more aware of the complex dynamics in each family, as well its role in society. Together with all the families of the diocese, preparations are underway for collective reflection in the light of the apostolic exhortation Amoris Laetiita.

Supported by the entire Focolare community, Evelyn is part of the preparatory committee. “For me this is a great opportunity to build relationships of unity with everyone. Every idea, every contribution, every decision or action to take has been the result of moving forward together with the bishop. There’s been a climate of mutual love created among us all.” 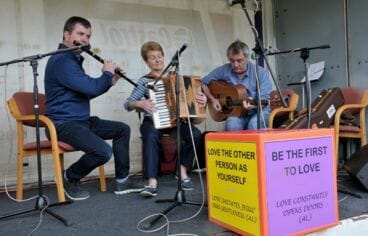 At the entrance to the immense public park, hanging from the tree branches, were the six sides of the Cube of Love, which included words from Amoris Laetitia and Chiara Lubich on the family. Moving in the wind, the cube greeted the public upon arrival. The same cube was rolled on stage at the beginning of the day, so that everyone could tune in to the message, “Be the first to love.” The day was a festive sequence of music and workshops on caring for the environment, family games, entertainment, face painting, dance and helping the needy.

There was a particularly intense moment of prayer together, led by the Anglican and Catholic bishops. They later cut a cake together, which not by chance was cube shaped. The moment was captured permanently by the local paper, the Roscommon Herald, and other websites and newsletters. At the end of the day one of the participants, Andrew, sang a song he had written about the three words that Pope Francis had suggested for family life: “Please”, “Thanks” and “Sorry.”

“As I was circulating among the people,” said Áine from the Focolare, “I thought of the words from ‘The great attraction of modern times,’ a meditation written by Chiara Lubich. I felt they described that moment, in the midst of a crowd made up of people from faraway villages and countries – not just Catholics, but other religious denominations.
“Some were from even further away, like those who had just arrived as refugees and asylum seekers, mostly Muslims from Africa and the Middle East. They were surprised to find such a focus on the family in Ireland as well.”