The pact of unity 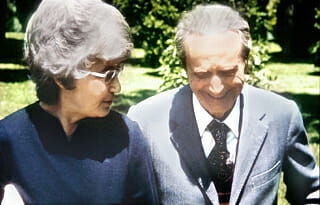 The Focolare recalls July 16, 1949 as the day on which Chiara Lubich and Igino Giordani made a “pact of unity” which would be the basis of the growth of the Movement. That day marked the beginning of the period of intense mystical contemplation for Chiara, which is known as “Paradise of 1949”.

“[…]We were living these experiences when Foco arrived in the mountains.

Foco, who loved Saint Catherine, had always searched in his life for a virgin he could follow. And now he had the impression that he had found her among us. So one day he proposed to make a vow of obedience to me thinking that by doing so, he would be obeying God. He also added that in this way, we could become saints, like Saint Francis de Sales and Saint Jane de Chantal.

At the same time, though, it seemed to me that Foco was under the action of a grace which should not be lost.

And so this is what I said to him, more or less: “It could be that what you feel truly comes from God. So we should take it into consideration. However, I do not share the idea of unity between only two people because all must be one.”

And then I added: “You know my life: I am nothing. In fact, I want to live like Jesus forsaken who annulled Himself completely. You, too, are nothing because you live in the same way.

“Well then, tomorrow we will go to church and to Jesus in the Eucharist who will come into my heart, which is like an empty chalice, I will say: ‘On the nothing of myself, bring about unity with Jesus in the Eucharist who comes into the heart of Foco. Jesus, bring about the bond between us that you want’.” Then I added: ‘And you, Foco, do the same.’ […]”