Hindu delegation visits Loppiano and Assisi: a meeting of hearts and minds 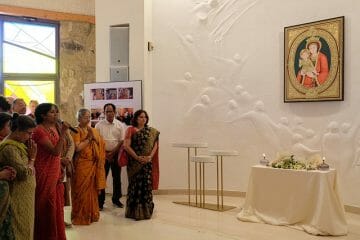 “Our Hindu-Christian delegation had two motives for visiting Loppiano. They hoped to explore and deepen their understanding of the very original experience that the Sophia Institute offers. They also wanted to commemorate the fifteenth anniversary of their presentation to the Movement of a painting of the Virgin Mary. The painting is the work of a Hindu artist and is now adorning one of the walls of the Theotokos Church in the little town.

The dialogue with the staff and students at Sophia was deep and enriching. Indian academics have a considerable interest in inter disciplinary formation in dialogue. The exchange and thoughtful comparisons made by the participants increased understanding among everyone present and it became obvious that Sophia Institute is similar to some of the academic centres that inspired Mahatma Gandhi. We hope that we will soon be able to introduce courses on this great apostle of dialogue at the university in Loppiano. 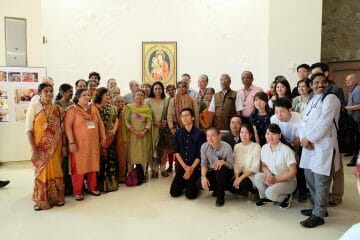 The seminar on Theology and the Practice of Dialogue was very interesting. There were not only the members of the delegation present but also many students and adults from the little town. Even though the subject is very topical, it was completely new to some people. In the evening, the Hindus came in procession to the Theotokos bringing flowers and garlands for the image of Mary. Gen Verde sang in the background. The reverence and solemnity created a deeply spiritual atmosphere. They spontaneously prayed in Sanskrit, Tamil and English and then there was the sacred moment of silence. Silence is an essential part of being oriental: in contrast, how uncomfortable it is for people from the west! It is as if people are not used to it or they are afraid to think too deeply about themselves. When cultures and religions meet with men and women of true faith, there is no need for compromise, syncretism or anomaly of any kind. Each gesture, each word, each moment of silence speaks of the Absolute. Everyone listens to it on their own wave length but the vibrations – as the Indians say – are always the same and penetrate the depths of the heart.” 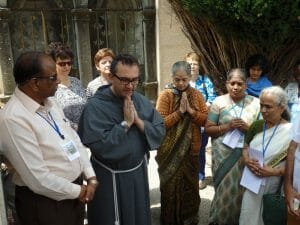 The last stage was Assisi. “We arrived at about 10.30 am. We walked up to the St. Francis Basilica and then on to the cemetery. I could not help but think back to the autumn of 1997 when the town has been hit by an earthquake and many people had been seriously injured. We had climbed to the top of the same hill with Vinu and Ashok, Dr. Aram’s daughter and son. Dr. Aram, a Gandhian teacher, had died some months before and had wanted some of his ashes to be buried in the land of St. Francis who he had greatly admired. Every evening, he used to recite his prayer, ‘Make me an instrument of your peace.’ The pilgrimage then continued to the crypt of the Basilica where we joined the monks as they recited the prayer of the ‘sixth hour’ in front of St. Francis’ tomb. There was a great sense of reflection, fraternity and spirituality. Our friends listened in silence as we prayed: it was a sign that they respected and valued our prayer as much as their own. The story of St. Francis, a man of peace and dialogue, continues to attract people of all faiths and from all over the world. Assisi is the perfect place for dialogue.”