A seed scattered in a distant land 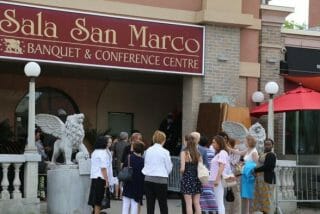 The organising committee of the “Italian Week” regarded Chiara Lubich as one of the most admired and respected women in Italy and, therefore, someone who should be remembered. The ten day Italian “carnival” that took place in the Canadian capital of Ottawa between June 6 – 25 focused on a number of famous people from Italy such as Giacomo Puccini, Sophia Loren, Vittoria de Sica and Alda Merini: it was a great surprise that the committee decided to include Chiara Lubich such names. When the Focolare community hear about this proposal, they asked themselves how best to present the charism of unity in a multicultural and multifaith society that is constantly in search of ways to peacefully respect diversity. The community also reflected upon the challenge of relating to the aboriginal people – a challenge that seems to be on going, marked by contradiction and with social consequences. 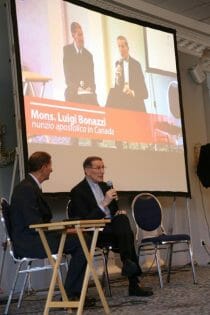 Fernando and Lucie explain, “While we were preparing, we heard that a group of Muslims from Montreal had recently participated in a Congress in Castelgandolfo, organised by the movement. These Muslims are students of Doctor Mohammad Shomali. They were very happy to work together with us and offered to share their experiences.” They continue, “On June 16, the San Marco hall in the centre of Little Italy, Ottawa, began to fill with people of many different origins – from Africa, Asia, the Middle East and, obviously, from Italy and Canada. The Apostolic Nuncio, Luigi Bonazzi, was present as was Minister Fabrizio Nava, representing the Italian ambassador.”

A range of experiences illustrated the relevance of the Chiara Lubich’s charism to today’s society. The first to speak was Jacques, a focolarino in Toronto and a “pioneer” in the spreading of unity in Canada. Then there was Anne, the manager of a tour company intriguingly called “Spiritours” who spoke about the economy of communion as a means of putting the gospel into practice at work. She was followed by Maria, a Brazilian focolarina living in Montreal, who recounted an experience of meeting with aboriginal people from Wati in the Gran Nord. Last year, responding to a request by the local Church, she and four other people spent a month with these people. 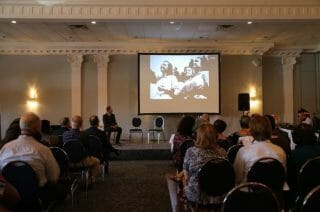 Then there was Edwige who comes from Togo but is now living in Rimouski, in the province of Quebec. She was one of the first students at the Sophia University Institute in Loppiano and now, having completed her course, puts “the person at the centre” of the work she is doing in another university. She recently received a commendation that is normally given only to professors. Then Fatima and Moustafa shared their experience of dialogue between Muslims and Christians and of meeting Chiara’s charism. Fatima said, “One of the most important things I have learned is that unity is a gift from God and that harmony in diversity is an expression of unity.”

Lastly, Monsignor Luigi Bonazzi, the nuncio in Canada, spoke. He confided that he had met the foundress of the Focolare movement on several occasions and that, many years ago, in 1975, he had made a pact with her to always “remain up” no matter what difficulties he faced. He said that this pact had sustained him during many years of intense diplomatic activity. The day concluded with the proposal first made by Chiara Lubich in 2000 in Washington, namely, to live the “art of loving.”

Through this event – widely publicised by social media – the seed of the spirituality of unity has been scattered in a distant land and promises to bear new fruits.