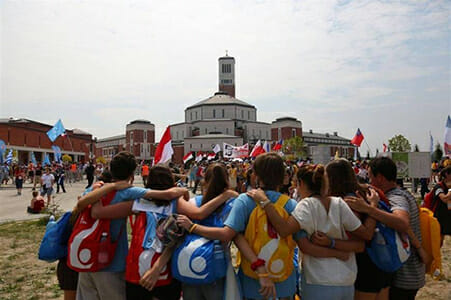 “We had a few special days here at Loppiano,” the organizers write, “special days in the first “school” for pastoral care workers. There were 75 of us from different regions of Italy, as well as some groups from Latin America and Rwanda.”
The title chosen for the workshop was Local Church: communion and mission – pastoral care in light of “The Joy of the Gospel.” The workshop took place in the Movement’s international town of Loppiano and was promoted by the Evangelii Gaudium (CEG) Center. It was a formation course as well as a research and study project offered by Sophia University Institute.

“We were pleasantly surprised by the effect the proposal had on the participants: both in the deep and mature sharing of ecclesial experiences and in how the spirituality of unity responded to their needs, as well for the spiritual presence of “Jesus the Teacher” which seemed to illumine the pastoral care experience.”
The presentations were high quality, prepared in close collaboration and in harmony with one another. The interactive afternoon workshops provided us with methods for implementing the content that was presented in the mornings.”

The goal of the workshop was to propose theoretical and practical models to people who are working to make the spirituality of the Focolare “visible and experienced” in the Italian Church, since it is a gift from the Holy Spirit that was given to Chiara Lubich for the whole Church of today.”

The course opened with an enriching introduction to the Trinitarian method used at the university in Loppiano, by Msgr Piero Coda, Director of the Institute; and a talk by Cardinal Giuseppe Petrocchi, president of the CEG, titled: Protagonists in the life of diocese and parishes. One of the attendees remarked: “How beautiful the analysis of the new cardinal. Every concept raised smiles and emotions. . . I believe I absorbed a certain human mentality, especially regarding the use of words when proclaiming [the Gospel]. With the excuse of respecting the other’s freedom, I hide and deprive the other of the great gift I’ve been given. The cardinal spoke with force and, in his analysis, you could feel his zeal for the Church and humanity, and the secret for contributing to their renewal.”

Other important presentations were given by Archbishop Vincenzo Zani, Secretary of the Congregation for Christian Education, and by Dr Vincenzo Buonomo, rector of the Lateran University.

One young man remarked: “Archbishop Zani’s presentation illuminated me a lot. You have to have a program: The Word, placing oneself in the school of ‘Jesus the Teacher,’ living new relationships, expressing the communitarian dimension of the Church, the dimension of dialogue which generates a universal brotherhood.” Other comments; “This school was interesting for rediscovering the value of the incarnated Word in renewing the human structures of the Church.” “Our missionary life passes through a living charity and, therefore, seeing it, others wish to be a part of it.” “Theoretical presentations were both beautiful and exhaustive. Today, the third day, I went through a little crisis, following an examination of conscience because of what I always propose to do and never manage to do. So it was a constructive crisis.” “I really feel that we all need this training, so that our actions will be supported by this knowledge.”
The workshop will continue with a second part that will take place in early October at the individual parishes.