Dialogue and politics, a possible binomial? 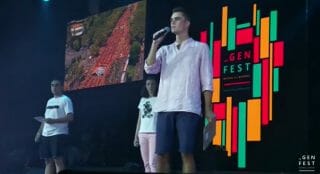 The referendum for independence held in Catalonia (Spain) on 1 October 2017, declared as illegal, gave rise to a season of strong political and social unrest and civil tension which directly involved all the sectors of the population, above all, the youth.

Martì is Catalonian and comes from a city near Barcelona, but moved to Madrid for his studies. As a Gen, he shares the Focolare ideals of unity with other young people of various regions of Spain and recounted that “despite this common value, also with them in the first three months in Madrid, it had not been easy. Furthermore in the residence where I live I was maltreated because I was the only Catalonian. I held many discussions with the Gen and we continuously ended up getting angry. But one day, we decided to resolve this situation by talking among ourselves and really listening to one another. We began to see that this was the most important thing we had to do: go beyond our ideas and not foregoing dialogue amongst us, since the most important thing was to understand and respect one another. I can’t say that from then on the path was simpler, but we understood that problems are solved when we set ourselves in the condition of really listening, and not wanting to impose ourselves, the. 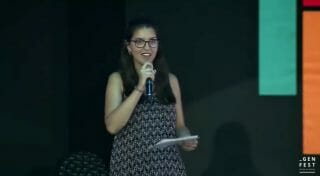 Alba is also Catalonian and recounted that the post-referendum period was a real test for her and for the other gen: on the social media some Gen had written their strong convictions about the political ideas of one or the other party, which hurt me deeply, but I didn’t stop to think whether my way of expressing myself could hurt those who do share my ideas.
It was in those days that I started reflecting on what it meant for us, who often say that we are even ready to die for each other. When would we have to put this promise in practice? I felt that the time was now. 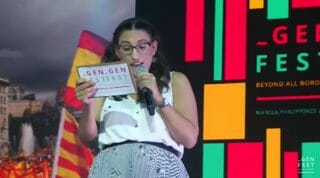 So we met up with all the gen from all of Spain to clarify things even if it was not easy since we were a big group and it was impossible to say all we felt. We continued to speak with some of them, like Laura. I remember that with her the situation was delicate because I did not know how we could face the problem without hurting each other. When she proposed to make a pact, that is, of putting love before everything else, I was taken off my feet! No one had ever proposed a similar thing to me but it worked because from that moment on we managed to dialogue. The objective was not to defend our ideas, but to take care of one another, and at the same time, leave room for free expression.

This experience made me see the political situation differently, and understand that what matters is not to be on the reasonable side, but that beyond the ideas there is always the person and this is more important. Still today our opinions have not changed: we think differently and this is not easy.

At times we have to ask excuse, but in talking, we reach the conclusion that both the positive and negative things are part of experience. The misunderstanding now has been transformed into something greater: it is not resignation, or only respect. It is that rose which is worth more than all the thorns put together.”