Summer boot camps in the outskirts 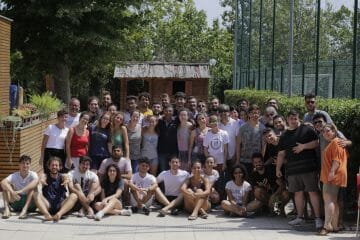 The Paper Mill, former factory at the periphery of Turin, northern Italy, thanks to a development process no longer looks like an abandoned facility. After which, it turned into a place of vitality and fresh air, thanks to the Turin Summer Campus organised by Youth for a United World, from 28 July to 6 August. A newly launched event, ideated to bring the outskirts towards the centre, and which saw an alternation of educational moments and concrete action. The strong point was the participation of the children of the zone, of different nationalities and cultures, who, with the youth of the Campus with simplicity and fun, created a recital, the outcome of the commitment and cooperation that arose during the artistic workshops (recycle-painting, music, theatre, dance, singing). A wealth of talents that upheld the cultural diversities in the neighbourhood, considered not as a motive for social discrimination, but for dialogue and exchange of ideas. Also the themes faced in the educational sessions triggered reflections which called the youths to become active citizens, opening debates on intercultural dialogue, end of life, “green” engineering.

In Rome the Summer Campus 2018 was held in the spirit of fun and commitment. The activities proposed in the Corviale district – a kilometre-long building known as the “Snake” – were various types of music workshops, murals and clay activities for the kids, and discussions on current issues, with the participation of experts, to reflect on the daily news and challenges: the peripheries, “grassroots” lawfulness, acceptance of the migrants from the social and juridical standpoints, participation in political life, the uselessness of war and media manipulation, origin and cause of new conflicts. 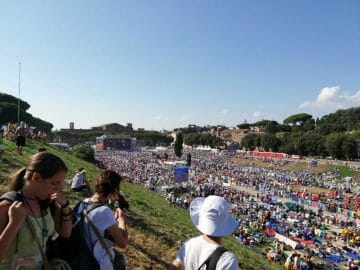 Besides the district associations, also some of the 8,000 families living in the “Snake” opened their doors and recounted their stories of suffering and hope. That which, at first glance seems to be an important building, and the end of which is invisible to the eye, seems to be a beehive of identical homes and windows, from inside is not scary: this is what the young people of the Campus felt, thanks to the encounter with people, countenances and stories which enabled all to go beyond the borders and prejudices, and above all the cement wall each carries within. The youth of the campus, children and families of Corviale worked together to prepare the final celebration in the district parish. It was an occasion to demonstrate the fruits of the workshops but also to build a chain between the realities, often diverging, of the territory and rediscover a sense of community and family.

The main path of this campus which ended on 11 and 12 August, at Circo Massimo in Rome, with the meeting of the over 70,000 pilgrim youths from all over Italy, with Pope Francis, then in St. Peter’s, with the Mass and Angelus. The pope invited each one not to be “couch potato youths,” not to aspire tranquility, but take the risk of bravely pursuing their own dreams. The experiences lived in the peripheries of Turin and Rome were engines that pushed each campus participant to take the first steps along this path, challenging but necessary, to make their own dreams a reality.