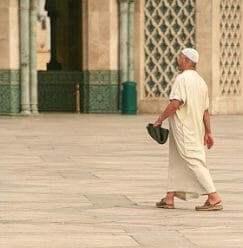 This year’s Islamic New Year’s is celebrated on September 12th, the first month of the Muharram calendar, (المحرم in Arabic), and one of the four holy months of the year. According to some, this feast celebrates the passing of Moses as he fled from Pharoah through the Red Sea. Others say that Adam and Eve, Heaven and hell and life and death were created on the tenth day of Muharram. This feast is celebrated in different parts of the Sunni world, such as North Africa where it has a particularly joyous character. The Shiites fast during the first ten days of Muharram; whereas for the Shunni, it is a voluntary fast as it is for Ramadan.