Tsunami and Earthquake in Indonesia 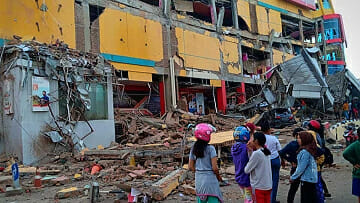 More than 1,200 cadavers have been recovered following an earthquake and tsunami that hit the island of Sulawesi. The Vatican is reporting that “1, 203 bodies have been recovered, but some have not yet been found or identified,” says Insan Nurrohman, vice president of Aksi Cepat Tanggap, one of the principal Indonesian NGOs. Rescue workers are labouring around the clock. Managing to remove people who are still alive is very delicate work. “The government is sending in bulldozers to clear the areas,” says Matteo Amogoni, who is in charge of Caritas Italy for Indonesia and Philippines, “but there is also the problem of no electricity and petrol.

At the Angelus, Pope Francis said: “I pray for the deceased, who are unfortunately many, for the wounded and for those who have lost home and work. May the Lord console those who have survived and provide those involved in the rescue effort with strength.”