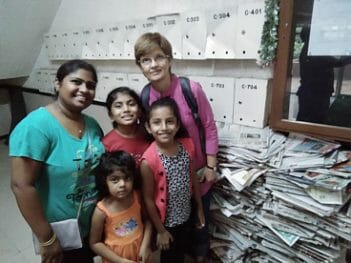 Last September, Mayur and his friends visited the slums in Bhandup and a school in Kanjur (Mumbai). They met with around 110 children. With his group, the Mayur’s Dance Academy, Mayur organised dance workshops for children at a town school in the Bhandup school district. At the conclusion, there was the long awaited distribution of nutritious food like milk, fruit, etc. to the joy of all!

Despite the strong rains over the last months, we, Young Ones for Unity of Andheri (Mumbai), went door to door to ask for old newspapers to sell as paper to over 50 families in our neighbourhood. We also handed out letters addressing all the residents of the neighbourhood, with the same request. Many gave us their newspapers willingly, others who did not have any wanted to give something just the same, like cereals, and notebooks for school, and lastly, others gave us money to buy school material.
Some parents and friends joined us, supporting the initiative also in the more concrete aspects. And so 383 kilos of paper were collected! The man who bought them gave us a good price, and moreover, also gave us some cash “since it was for a good cause,” he said. 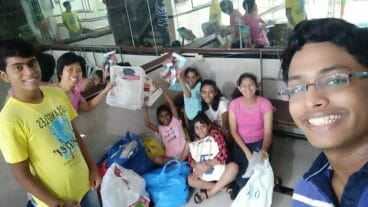 With the sum collected, we bought a lot of cereals which we donated to the Ursuline nuns who take care of children affected by AIDS and their families. Though it was tiring, the happiness for having done something concrete was greater. Our efforts, though modest, were a small step ahead in contributing to the “Zero Hunger Project.” launched by the FAO (Food and Agriculture Organization of the United Nations – http://www.fao.org/home/en/) and to which we, the Young Ones for Unity all over the world, are committed to.

We’re so happy that all went well – concluded Anu and Alvin, the Young Ones for Unity of Andheri – but now we want to continue and do something more to build a better world, eliminating hunger, starting from our own neighbourhood.“