The enduring legacy of the “Velvet Revolution” 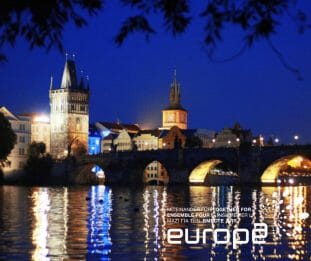 The great history of Central Europe, in particular of the Czech nation will serve as a backdrop for a new stage in the journey of Together for Europe, which promotes dialogue between divergent cultural and political identities.

In November 2017 the European meeting of Friends of Together for Europe took place in Vienna, a bridge between Eastern and Western Europe. This year, we will have the opportunity to take another step to the very heart of Central Eastern Europe – Prague, with a singular desire to face challenges, prejudices and fears which weigh on the collective conscience of EU member states and beyond. Through the life of the Gospel, nourished and enlightened by the presence of Christ in the Christian communities, we wish to witness to the fact that the path towards Europe as a House of Nations and a Family of Peoples is not a utopia.

The enduring legacy of the “Velvet Revolution”

On 17th November, the Czech Republic commemorates the anniversary of the “Velvet Revolution” (so called due to its peaceful nature) which transformed the Czech Republic into a co-protagonist for the ongoing process of European reunification. The presence of the Friends of Together for Europe in Prague on this very day, urges us to renew our shared commitment: to bring to a post-secular culture the spirit of Christian Humanism, and in so doing contribute to building a more united Europe.

The renowned Czech Philosopher and Theologian Tomas Halik, friend of the late Vaclav Havel, Jaroslav Sebek of the Historical Czech Academy of Science, and Pavel Fischer an emerging Czech politician, together with leaders and representatives of different Movements, Communities and Associations will be present. Their contributions will reinforce the daring objective of this meeting: to recall a Europe of hope and promise, a Europe which stems from a rich heritage of ethnic, social and cultural diversity and calls out for communion and dialogue.

In this way, the Prague event will become a fundamental phase of Together for Europe which continues its commitment for a more united, brotherly and just Europe. It will also be a unique opportunity to prepare together for the upcoming elections for the European Parliament. The meeting will conclude with an open evening, in which Movements and Communities from different churches and which are present in the Czech Republic will be represented.

Source: Together for Europe