Ana and the cross of Hugo 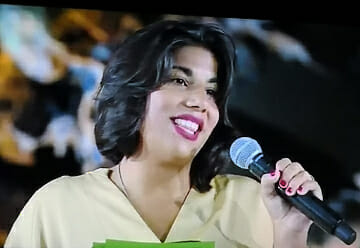 Ana is 19 and lives in Spain. She started to talk while she walked onto the stage of the Paul VI Hall. “In order to better know about the socio-sanitary sector, last March I went to a hospital in my city,” she recounted. In the hospital she was received by a social worker who, instead of many words, lent her a gown, put a case sheet in her hand, and accompanied her to the room of a patient: “When I entered and saw him, a shiver ran down my spine. I had to leave for a second to take a deep breath.” On the bed lay a boy, just a bit older than her, a terminal cancer patient. Ana took courage and returned to the room: «How are you?» He looked her with surprise, and asked her to repeat the question. “The first thing I did was to present myself – then he said – I have been here for two months now. I have bone cancer and I don’t have much time to live and I feel that I am losing everything: the family, my job, my girlfriend. My life no longer has a meaning.”

Ana was in a state of shock. A million emotions and thoughts passed through her heart and mind. However, she tried to start a conversation by telling him about herself and her life. After a few minutes of silence the boy asked: “Do you believe in God?” Once again Ana was taken aback but answered with a big “yes.” “I instead, say no, since he has abandoned me – he added – because in just a few month he will take my life. He has really left me alone.”

The young Andalusian girl entrusted herself to God before answering: “What you feel now has a name, it is ‘Jesus Forsaken.’ God has not abandoned you and he continues to stand by you more than ever. He is putting you to the test and with what you are undergoing is asking you a question which you still may not have answered: “Can you follow me also in the greatest suffering?” He has chosen this cross for you and for you alone, for a reason, because he wants you to bear witness to his love. He wants to make you a saint. You can become a saint if you accept and receive this suffering, and if you take it as something that comes from God and not as something you own. Then, without second thoughts, start loving the people around you, your parents, your girlfriend, your friends, making them see that you do not fear death because you have found something precious that helps you to live moment by moment, without thinking of what you will be tomorrow.” “Through the social worker I found out a few days after my visit, that his health had worsened, Ana recounted – and that he asked to receive the sacrament of the sick, to be able to go in peace. After some time, I received this letter…”

On the stage of the Paul VI Hall, a young actor reads out Hugo’s letter: “Hi Ana, let me tell you something about myself. These have been difficult days since the cancer has advanced much faster. I felt more tired and weak, but those were the occasions in which I had to love more. These have been hard days since I saw that death was coming closer and it scared me a bit. But when this happened, I remembered that it is not death that beckons, but God: he was calling me to be with Him in Heaven, and this gave me the strength to smile, to love. I have now very little time left down here, Ana, but I must tell you that now I am not afraid because I know that I shall be fine up there.
Thank you for pulling me out of that deep hole, for listening to me, but above all, thanks for having brought a new God into my life. I want you now to live for both of us, enjoy for both of us, and fulfill all your dreams. I shall always be beside you, and from Heaven, I will take care of you every day, I shall be like your little guardian angel. I gave the social worker a cross which she will give you on my behalf. I have always worn it since my first Communion, but I want you to have it so that when you look at it, you will remember that this is the Cross that God wished for you and has to be borne with joy and love always. I shall await you in Paradise, Ana.”