Make the other’s culture your own 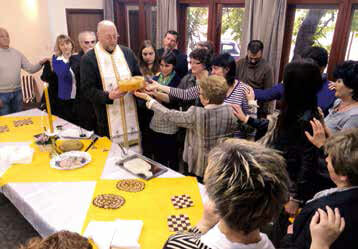 I am an internist and belong to the Russian-Orthodox church. As a person and believer, I was educated by my parish priest and the spirituality of Chiara Lubich. I was still very young when, through contact with the focolarine in Moscow, I felt the call to follow God in a radical way and I have been living in the focolare house of Belgrade (Serbia) for 7 years now.

There is a particular and unique tradition in Serbia: the Slava feast, which the families celebrate on the day of that family’s patron saint; for the Serbs, the Slava is as ancient as Christianity itself. No Christian nation has this type of celebration, except the Orthodox Serbs. For a Serbian family the Slava comes after Easter and Christmas in terms of importance. The Orthodox-Christian missionaries who converted the Serbs to the Holy Orthodox faith, also Christianised their customs. Upon becoming Orthodox Christians, the Serbs accept the saint or saints of the day on which they are baptized.

In  Serbian culture, the Slava has always been a unique element throughout the history of the Serbian Orthodox people. Since the Serbs find themselves in a geographic region between the East and the West, and between different cultures, the Slava has become a feast identified with one’s own name and existence. It is celebrated by cities and even by military units also through cultural and social organisations. On that day, relatives, friends and acquaintances get together. The house is open to all.

Our focolare is composed of Catholic focolarine from various countries and by me. For some time now we have felt the desire to make this beautiful tradition of the Serbian people our very own, and celebrate it together with our brothers and sisters. In the ecumenical spirit of the Focolare, our monk-friend, Fr. Djordje, helped us to choose our patron saint, and he suggested celebrating the holy “mironosice” women (the “women who went to the sepulchre with the herbs and spices”), and to whom the Orthodox Church dedicate an entire week starting from the second Sunday after Easter.

So we have celebrated the Slava in the focolare for 4 years now. Many of our Orthodox friends were enthusiastic about our decision and helped us to prepare the things needed for the feast. Every year, for the Sunday of the holy women at the sepulchre, we welcome our friends of various  churches, among whom are also our next-door neighbours, and some colleague, labourer or doctor. The highlight – the rite of slicing the Slava bread – is celebrated by our friend, Fr. Djordje, before the icon of the women at the sepulchre. We start with a devout prayer, accompanied by songs, and then, very moved and hand in hand, we pray according to the Slava feast tradition. Giving us the first benediction, Fr. Djordje pointed to the holy women of the sepulchre as models and protectors of the focolare, encouraging us to follow the example of the women, follow Jesus and become “like the salt that transforms society and its surroundings.”

The rite is followed by the agape, with various culinary specialties in an atmosphere of joy and communion, as in a family. One of our acquaintances told us that he considered this step “a real enculturation that appreciates and makes the other’s culture one’s own: true Christianity.”