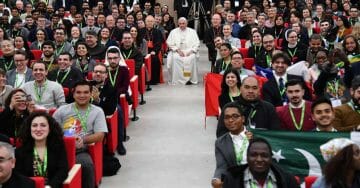 “It is often to the youngest that the Lord reveals better solutions.” These are words from Saint Benedict in his “Rule.” These were also the words chosen by Pope Francis when he announced the 15th Ordinary General Assembly of Bishops, on October 3-28 , which has just concluded. Preceded by a Preparatory Document (January 2017), a Questionnaire in several languges and by a Pre-Synodal Reunion (March 2018) with the participation of around three-hundred young people and several thousand others through social media, the Synod was the final step on a long and well organised walk. It was a walk of mutual listening, attentiveness, sharp and open dialogue ‘with’ and ‘about’ the new generations.

Sixteen thousand responses arrived from Uganda alone. In line with previous Assemblies, the Synod had a common thread: renewal of the Church and society starting from their very foundations: the family and the youth who guarantee the future generations,” as Cardinal Lorenzo Baldisseri , Secretary General of the Synod of Bishops, explained during his inaugural press conference. “Youth doesn’t last a lifetime,” remarked Archbishop Rino Fisichella, president of the Pontifical Council for the Promotion of the New Evangelization. The period of youth comes to an end at a certain point. But what remains is having lived it intensely. The most important thing is to give meaning to the great gift of life that has been placed in our hands.” 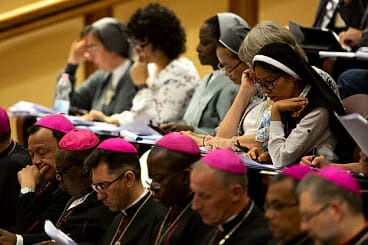 On Sunday, a solemn celebration and the publication of a Final Document concluded the Assembly. More than 150 bishops attended the Synod, two of whom came for the first time from continental China. There were 40 young people under the age of 30 attending as auditors. They were a significant presence, exuberant and at times noisy, always active on the digital channels with the publication of posts and selfies with the Pope and the other bishops, whom they met informally in the corridors, moments of recreation or in more official settings like the small discussion groups. They were always ready for a conversation or for offering their contribution of positive criticisms and concrete proposals. Without any fear of the high-sounding titles or silver hair, they took to heart the Pope’s invitation to: “cling to the bark of the Church which, even through impestuous storms in the world, continues to offer refuge and hospitality to all.” It’s worth the trouble, he had said, “to place ourselves in a position of listening towards each other.”

“A Synod of very particular significance,” affirmed Cardinal Reinhard Marx, Archbishop of Muchen und Freising, president of the German Bishops Conference, during one of the many briefings with journalists, “a place of learning about the youth,” whom the Synod of bishops wanted to know in depth, thanks to the input of the ones they were directly interested in knowing about. The relationship between the virtual world and the real world, immigration, the role of school and universities, parish life and the formation of catechists, friendships and relationships, were just a few of the topics they dealt with. “They also talked about digital pastoral ministry, how the Church can find its place in the world of social communications,” explained Paolo Ruffini, Prefect of the Dicastery for Communication. “We have the same problems,” insisted Bishop Andrew Nkea Fuanya, Bishop of Mamfe, Cameroon, “but we face them from different points of view.” The churches in Cameroon are filled to the brim, but the youth are unhappy because of the many problems that spread across Africa. How are we to help them? We’re all in search of the same solution.” “A Synod on the youth with the youth,’ said Tadeusz Kondrusiewicz, Archbishop of Minsk-Mohilev and president of the Bishops Conference of Bielorussia, “which makes it particularly dynamic, because the young are never static.” “Vibrant was the surprise over the closeness of the topics that were faced, in the challenges of today’s Church even in the diversity of circumstances,” said Pastor Marco Fornerone from the Evangelical Church in Rome, who was attending as one of the 8 fraternal representatives.

In the course of the Assembly, on October 6, a special meeting was held between the young people, the Pope and other bishops, against the backdrop of Paul VI Hall, titled “WE FOR – Unique, Supportive, Creative” There were three main topics: the search for identity, relationships and life as service and giving. There were also many life testimonies , studies, work and the difficulty of making decisions for the future. The program was interspersed with music and artistic pieces. In conclusion, at the end of the Synod, there was still one last gift from the Pope to the young auditors: a copy of Docat, a source of the church’s social teaching, Leo XIII’s “Rerum Novarum”, and all the writings of Pope Francis, including the most recent. The handbook has a question and answer format and focuses on the role of the human being in the Church and in the society.

Letter from the Synod Fathers to Young People

Letter from the Synod Fathers to Young People

Find out more about the Letter from the Synod Fathers to Young People: https://www.vaticannews.va/en/church/news/2018-10/synod-youth-2018-video-letter-from-synod-fathers-to-young-people.html#play