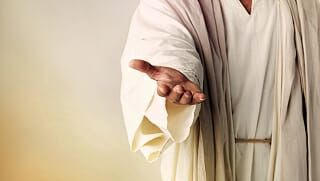 “In Jesus, God simply made himself our brother. He did not only stand beside us, but he entered into us, into our hearts, into our wounds. In doing so he made the wounds of man his own, and thus the wounds that burn in humanity became God’s in this man, Jesus of Nazareth. When he says, ‘I am the way,’ all we need to do is look to the open wound in his side, and there we will find the way. This is certainly not easy; it’s not obvious, either. Yet if we try, if we attempt it, if we risk it, we will realize that he is the way.”

“In Jesus in shows how God, who up to now in the history of his people seemed to have been silent, had not fallen asleep, had not fallen mute. He comes, gathers his poor people and takes them in. He doesn’t do it, however, with lightning action produced by his omnipotence, but in a smaller way, the way of Jesus, the hidden way of service: the way of the cross.”

“Jesus was accused of being a friend to sinners and tax collectors, for having kept ‘bad company.’ His behavior certainly left himself open to misunderstandings. You might say it was a simple criticism of the established order, simple likable eccentricity, or simple protest against the establishment and fixed values. But no: for Jesus, in whom God’s heart beat, he cared for everyone and everything. He didn’t care about those on fringes just in themselves, but rather in that they were part of the whole. “He too is a son of Abraham” (Luke 19:9) is how Jesus himself justified, to the so-called ‘gentlemen’ and those who pretended an external legality, his friendship with Zacchaeus the tax collector.”