500 “Prophetic Economy” participants from 40 countries and all five continents were gathered from 2 to 4 November at the International Mariapolis Centre, CastelGandolfo, near Rome, Italy.
The event facilitated interactive and intergenerational exchange through a program of inspiring contributions, work groups and creative workshops.
What began as an international platform of encounter, exchange and encouragement, the event went far beyond the limits of mere networking, to become a driving force of energy and commitment for initiatives and actions at local, regional and international levels.

Internationally-renowned economist Jeffrey Sachs, a key speaker at the event, affirmed, “Prophetic economy means an economy that operates in the vision of the prophets, of justice, of peace, a vision of meeting the needs of the poorest people, a vision of protecting creation.”.

Diversity characterized the participants: economists, ecological activists, experts from the financial sector, students, entrepreneurs, people from a variety of different cultural and religious backgrounds, with a wide age range – the youngest being only 9 years old! The younger attendees were protagonists both in age-specific sessions involving interaction with experts in the fields of economy and ecology, and in cross-generational panels, contributing their own distinctive questions, proposals and life experiences.

“How good it has been to have the children and young people with us” said Josiane Gauthier, Secretary General of Catholic Development Alliance CIDSE. Inspiring us with their profound intelligence and grace and truth”.

The event highlighted examples of good economic practices. As Italian economist Stefano Zamagni explained, “It‘s those who look ahead and dare to gaze beyond the obstacles. The current economic and social models no longer work”.
“These kind of economic practices already exist”, observed Lorna Gold, economist with Trocair, the Irish development agency, “but all too often they’re invisible in the media and our culture.”

The “Prophetic Economy Award” was launched to promote good practice through examples of the prophetic economy in action. Carlo Petrini, founder of the Slow Food Movement, acknowledged the award winners. “They practice a form of economic reality different from the norm, they see beyond the pervasive economic modes. They are not so much prophetic in vision, as in their daily practice.”

“This is not about utopias or ‘small islands’ within an unjust and unchanging system. Here, we’re looking at signals of tangible change,” observed Argentinean economist Cristina Calvo. “In the face of massive global financial mechanisms, we run the risk of feeling powerless. The antidote to being static is to widen the spectrum of action on all levels: micro, medium and macro.”
A significant element within this event was the space given to those living in situations of poverty or social exclusion to make their own voice heard.

“The time has come to rethink our economy and rethink our world, not ‘for’ the poor, not even with their participation, but starting from them,” concluded Jean Tonglet of ATD Fourth World. “Our knowledge is incomplete until it includes the knowledge of those we want to liberate from poverty, who struggle with its effects on a daily basis.”
The challenge launched by this event is to invent new ways of collaboration, in order to be stronger and more creative in efforts to change to lifestyles based on a more sharing, more just and more sustainable economy.

“The new idea at the basis of this event,” explained Italian economist Luigino Bruni, “was to bring ecology and economy together. In today’s world, we cannot speak of poverty without mentioning climate. One of the great messages of Pope Francis’ pontificate is the invitation to activate processes, not occupy spaces, because time is superior to space. Here, we can say that a process has been started”.

The younger participants spent time considering and embracing the challenge launched by the World Food Organization to work to eradicate hunger in the world by 2030 (#zerohunger),formulating their own proposals:
– to promote the idea of a “deferred meal”, asking restaurants and bars to encourage their clients to buy an extra meal for someone in need, and issuing a #zerohunger sticker to participating businesses;
– to campaign for a new subject in the school curriculum teaching the Sustainable Development Goals promoted by the United Nations. 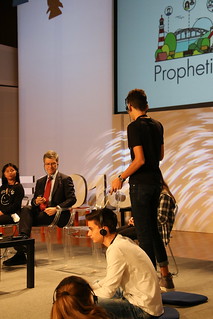