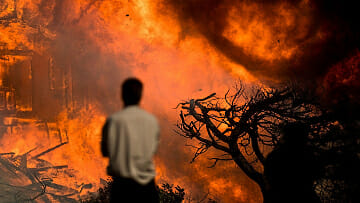 With an estimated 31 victims thus far, the huge fire that developed in California has broken the record as the worst burning in the history of the Golden State. An additional 220 people are still missing. The main fire that developed north of the capital of Sacramento is still partially out of control. In this area of ​​the Sierra Nevada there has been very severe devastation. The town of Paradise with 27 thousand inhabitants was completely swept away by the flames, with a high number of victims, at least 14.

There are two other smaller fronts further south between Los Angeles County and Ventura County. In total, more than 300 thousand people have been displaced from north to the south of the State. In the most affected areas, the scene appears ghostly, with woods and villages reduced to ash heaps and a few areas completely deserted. The strong winds of up to over 110 kilometres an hour, caused a spectacular and devastating “fire tornado” that incinerated everything in its path. This is just one of the umpteenth environmental disasters that have been happening all over the world because of climate change, but also because of the lack of care for the environment.