She moved to Rome in 1951, and she accompanied Chiara on all her trips around Italy, as well as South America, Asia, Australia, North America, Europe. “It was a divine adventure,” she said, “Keeping up with Chiara was no mean feat! We went from one surprise to another.” She was Chiara’s confidant and counsellor in the difficult years when the Focolare Movement (Work of Mary) was being studied by the Church. She also followed, in a particular way, all the media developments within the Movement: the birth of the St Claire Audiovisual Centre named after St Claire of Assisi, as well as the beginning, in Switzerland in 1980, of the “conference call” which soon extended to all the nations where the Focolare was present. Whilst it started off simply as a way of sharing the spiritual life, joys and sufferings among everyone, the conference call subsequently evolved, through technological advances, into that which today is a live streaming event via satellite! Still now it is referred to as CH (from the Latin Confoederatio Helvetica) in order to be true to its Swiss origins. 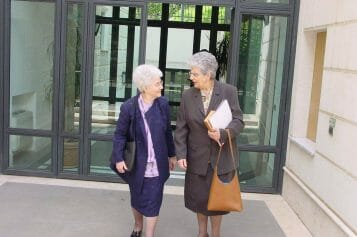 Eli always accompanied the founder of the Focolare Movement on important encounters with the great dignitaries of our time: from Pope Paul VI to John Paul II, from Mother Teresa of Calcutta to Vaclav Havel and the Ecumenical Patriarch of Constantinople, Athenagoras I. Her testimony as a direct witness to these events is contained in the book Lo spartito scritto in Cielo. Cinquant’anni con Chiara Lubich (“The Score Written in Heaven. Fifty years with Chiara Lubich” (Città Nuova, 2012).

Giulia Eli Folonari was the Director of the Chiara Lubich Centre since its foundation in July 2008, right up until 2014. This institute aims to be a custodian of the thought of Chiara Lubich, to assure its authenticity and to help spread her charism, as well as to preserve the history of the Focolare Movement through meetings, conferences and a dedicated website. The Centre ensures that the rich patrimony of paper-based archives and multimedia documents that the founder of the Opera di Maria left behind is made available to scholars and the public in general.