Two days of visits for the General Council of the Focolare to the holy sites – from the Church of the Nativity in Bethlehem to the Cenacle, from the Garden of Olives to Calvary. Highlights included meetings with local leaders to delve into issues of great relevance for the Holy Land. 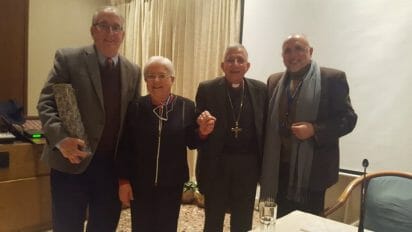 The 14th and 15th of February were set aside for a full immersion into the religious and political situations of the Holy Land. Together with the thousands of pilgrims who crowd Jerusalem every day, the General Council set off to visit some of the holy places. But that was not all. These few days were also dedicated to deepening our understanding of the political and religious situations of this land. Accompanying us on this journey were two prominent local leaders: Rabbi Ron Kronish and the emeritus Lutheran bishop, Munib Younan.

While speaking about Jewish-Christian dialogue, Rabbi Kronish said, “The war between Jews and Christians is now over.” Both he and Bishop Younan spoke about the political conditions necessary for peaceful coexistence, not only between Israel and Palestine, but also for the entire Middle East. “Two peoples – two states” is the slogan that expresses the essential basis on which to build true peace – according to these two men of dialogue who have been friends for many years.
“Only with two states will we be able to put an end to the violence,” said Rabbi Kronish, the founder of many initiatives of dialogue. He is convinced that once the war is over the economic resources necessary for a policy of education and training for peaceful coexistence will become available.

Munib Younan, who was born into a family of Palestinian refugees, added other elements, which, in his opinion, are necessary for a lasting peace – a Jerusalem that belongs equally to the three great religions (Jewish, Muslim and Christian) and to the two peoples (Jewish and Palestinian) as well as a solution for Palestinian refugees. He also agreed that, after political choices, a training strategy is needed – especially for young people. He gave an invitation to the Focolare – “Start a lay movement like yours among the Palestinian Christians – there is a great need.”

Pierbattista Pizzaballa, the Apostolic Administrator in the Holy Land, received the General Council last Thursday in the Roman Catholic Patriarchate. In his greeting he emphasized the power of what is small. “We Christians in the Holy Land are few in numbers, weak and fragile. It’s because of this that we can make the provocative proposal of a Jerusalem that is not only heavenly, but also of this earth, which has, as it says in the Book of Revelation, all its doors open. The task of Christians would be to sow, without expecting to see the effects. Sow seeds, even small ones, and leave it to Divine Providence to make them grow and give fruit.”

This invitation of the Archbishop seemed to come true a few hours later, next to the Church of San Pietro in Gallicantu. Adjacent to the steps on which, according to tradition, Jesus expressed his prayer for unity, Maria Voce, President of the Focolare, planted a small medal in the ground. It is the first seed of an “International Centre for Unity and Peace” that is about to be built right here in Jerusalem as the fulfilment of a dream that Chiara Lubich, founder of the Focolare, expressed during her visit to the Holy Land in 1956.
Maria Voce said, “Chiara, from Heaven, will bless this project and carry it forward.” It was a profound moment, attended by 170 members of the Focolare communities in the Holy Land. These people are witnesses to the fact that the small seeds that have been planted in this land over the course of many years are already beginning to grow.