An oasis of peace for child soldiers

“We would like to create a safe haven where poor children can experience dignity, realize their dreams and grow up in an environment that promotes a mentality of peace and justice”. These were the objectives of Fr. Rito Julio Alvarez, a priest from the Ventimiglia-Sanremo diocese, when he set up the Oasis of Love and Peace Foundation in 2006, in the Catatumbo region of northeast Colombia.

This NGO was set up in one of the poorest areas of the region where Fr. Rito was born and lived for twenty years. It aims at offering an opportunity that safeguards children in this country from being recruited by the rebels or forced to work on coca plantations.

This idea matured from Fr. Rito’s personal experience, that can be read on the Foundation’s website http://www.oasisdeamorypaz.org/ – “He came to know about the guerrillas when he was a child. Very often these illegal revolutionary groups came to the village and tried to persuade children to join them. Some of his companions, even 11 or 12 years old, were enticed by the offer of these rebels, joined them and died in clashes with the regular army.This is what happened to his childhood friend who was killed at the age of 14. Nothing was known, not even about his abandoned body”. He relates: “In the 90’s, the peasants in the territory were made to believe that planting Coca would change their lives, but instead the situation got worse. In 1999, paramilitary groups came into the scene and great massacres ensued”.

Rito Julio Alvarez became priest in 2000. From Italy he followed his people’s suffering owing to the war that broke out because of the control of the coca plantations, that involved paramilitary groups, government armed groups and guerrillas. In a few years, in a territory of 250,000 inhabitants there were about 13,000 deaths. Even his family members had to be evacuated and many of his friends were killed. 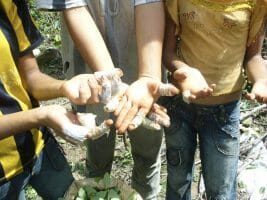 The need to help these people was great. Together with his relatives at Catatumbo, he decided to set up a home for child soldiers and for those who came from the coca plantations. He recalls: “We started in 2007, in a small shack where we welcomed the first 10 boys. We had no money but we had a lot of goodwill. We prepared their beds; my sister was a mother to them and she saw to their food. My mother lent me cutlery, dishes, pots and blankets. This is how we started this adventure”.

Today, the Foundation handles two projects that comprise the breeding of fish and livestock and banana and coffee plantations. Hundreds of children have been welcomed by the Foundation; some of these have become educators and NGO managers. One of them, whose relative was a drug trafficker in the area, is involved in politics.

“I am so pleased when the Foundation welcomes those children whom I have seen harvesting coca leaves with their sore hands”, says Fr. Rito very emotionally, “and here they grow up and live in an environment of peace; they feel safe and can think of a different future. All this encourages me to look ahead without fear. My trust in the Lord assures me that this work can proceed”.