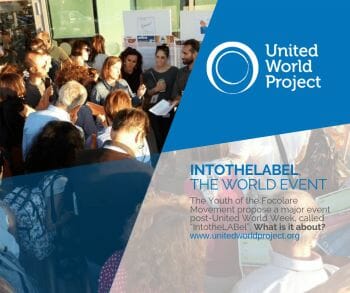 From #zerohunger to “Into the label”: the youth of the Focolare Movement also take the plunge to work for a better present and future for all: eliminating hunger and poverty, and increasing the sense of social responsability are only some of the main objectives of these protagonists.

The 2019 edition of United World Week could not happen at a better moment. It is taking place when youth from all over the world, especially the very young ones are invading squares, parliaments and the social networks with colourful expressions of a unique cry that expresses their aspiration to save the planet in order to have a better world and a better future.
Things happening during these days show that Greta is just the tip of an iceberg; we may say that she is the spark that has started the fire and encouraged thousands of children to come into the open and declare why they protest and also reveal their hope.

Marina, a young girl from Brazil, who is presently at the International Youth Centre of the Focolare Movement explained: “We will concentrate on giving our message from May 1 to 7, during United World Week which is organized every year. Together with the adults we want to tell the world that we are fully committed to struggle against poverty so that there will be no one in need, and we want to work to eliminate hunger”.

Two initatives: #zerohunger and #intothelabel
Marina continued: “There are hundreds of initiatives organized in the world; two of these are being promoted in a way to reach as many people as possible. The first one is the #zerohunger campaign through which Teens4Unity are promoting a lifestyle with commitments to eliminate hunger, such as sharing a meal with people in need or involving restaurants in accepting the idea of “prepaid meals”. This means that they allow customers to pay in advance for one or more meals that are to be distributed to those in need.
Then there is “Into the LABel”, the responsible consumption laboratory, set up by a group of young people who adhere to the Economy of Communion. This consists of the possibility each one of us has to “vote with the portfolio”, because when we choose to buy a product rather than another, we are also chosing to reward the values and the production style of the company.

Chiara, one of the promoting group explained that we also vote when we go to the supermarket, that through our wallets, we exercise our “purchasing power”. Prof. Leonardo Becchetti, a veteran of this concept talked of the civil responsibilty it involves; he explained: “May be we do not think about it, but it is quite clear that when we buy a product we express a preference, we reward and support the work of the company that produces it, the way it carries out its business, its declared mission, its internal processes, the relationships with its employees and suppliers, its environmental impact”.

“Global” appointments
Two dates have to be kept in mind for the coming United World Week. On May 5 there will be the launching of the Run4Unity, the traditional worldwide relay where teenagers and children express their commitment to build one human family so that there will be no more people in need on earth.
From 9 to 16 June, there will be the “No one in Need” event at the Mariapolis Luminosa (USA), where reports about activities carried out worldwide to fight hunger and poverty will be shared.