It’s a shop where no money changes hands. Instead freely donated goods are passed on to those who need them. It’s one of the most recent fruits of the experience of the Diocesan Movement in Ascoli Piceno, in central Italy. 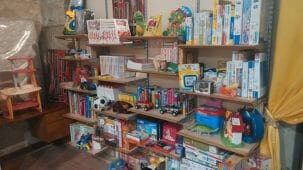 It’s been called the “giving and reusing shop.” Here you don’t pay with cash or a credit card, but with a smile and a firm handshake. You go there to donate objects, clothes or appliances – or to receive those that you need. That’s how it works. It is located in the historic centre of Ascoli Piceno, a city in central Italy that is dotted with towers and medieval bell towers made of travertine stone. “Passamano” is the name of the shop. It means “passing from one hand to another.” It grew out of the experience of a branch of the Focolare Movement called the Diocesan Movement. Deeply rooted in six dioceses of central Italy, the Diocesan Movement operates at the service of the local church, promoting an intense life of communion within the ecclesial reality.

Alessia Giammarini, a young mother of two children aged 9 and 6, has been a part of the Diocesan Movement since primary school: “I started attending meetings in the parish every Saturday afternoon when I was in third grade. Later I discovered that there was an entire community around our group, which was made up of young people and adults who took care of the little ones. I still remember the first school camp. For me it was a moment of fundamental growth, where I realized that God was calling me to make a personal commitment. For many years, in addition to running the parish youth group, I was involved in catechism and the choir. It is still a path of growth for me, and for many others. For us the parish is not only 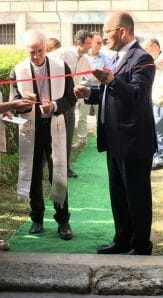 a place of service, but above all it’s a place of communion.”

Alessia’s personal history was further enriched when this commitment was extended to the diocesan level. This is how she explains it…
“Some of us entered into service as deacons or as ministers of the Eucharist. Others, like me, proposed a series of radio programmes about the local Christian community to be broadcast on the diocesan radio channel. For each episode we invited people from various movements and associations, religious communities, diocesan bodies … or the bishop himself, to present initiatives and events. Our presence as a Diocesan Movement then began to become visible at the political and institutional level. For example, Ascoli was the first city to be awarded the International Prize “Città per la Fraternità” (Cities for Fraternity). It was awarded because of an initiative we had launched involving the whole city and the mayor accepted the award on the city’s behalf. In recent years we have launched events dedicated to citizenship, such as the “Festa della Fantasia,” (Festival of the Imagination) which was included in the Ascoli Carnevale, or the “Capodanno di tutti,”(New Year for Everyone) which promoted involvement of the most disadvantaged people. ”

How did you come to open the “Passamano” shop?

“It was the proposal made to the diocese and to Caritas to respond to the multiple situations of poverty caused by the recent earthquake in central Italy. In this city, “Passamano” has become a clearly visible reality, a way to promote the culture of giving, the practice of reusing things and emancipation from the mentality of consumerism.”