Syria / 2: We want to turn the page and make a new start.

On Saturday May 4th the president and co-president of the Focolare met with the Syrian community of the movement. The sharing of their testimonies conveyed their pain and their sense of loss and mourning, but also their wealth of culture and traditions – and their desire to live and to rebuild their homeland.

From the very beginning, Saturday 4 May promised to be very intense. Three hundred members of the Syrian Focolare community met at the monastery of St Ephrem the Syrian in Sednaya, about 40 kilometres north of Damascus.

The day began with the story of the movement, told with the same words that Chiara Lubich used so many times – words that are known, almost by heart, by members of the Focolare communities around the world: “It was during the war and everything was collapsing…” But what made today’s telling of the story different is that after retelling each episode of Chiara’s life, one of the Syrians illustrated it with their own recent experience in this tormented land.

There were those who, on returning to their city, could no longer find their houses, those who had lost their jobs, or their physical or mental health. There were those who felt they had seen their futures, or their faith in God or in relationships, stolen from them. Many have lost loved ones. Up to this moment there has been no compensation for many of these losses. “We are dead inside,” says one of them, encapsulating the mood of so many, perhaps of all who are present.

Yet on the background of the stage, in Arabic, we read “And we have believed in love,” – the phrase that Chiara Lubich and her companions wanted to see written on their graves – ever since those early days when the movement was taking its first steps, in the middle of the Second World War.
The final song that expressed the famous “Art of Loving,” which has been explained so many times by Chiara Lubich, underlined this belief in love. It’s the art of loving everyone, of being the first to love, of seeing Jesus in every neighbour, of loving our enemies. Those who were present stood up, began to dance and to express with all their senses a common desire, to turn the page and to make a new start.

Right before our eyes we saw once again the two realities that distinguish this journey of the delegation of the International Centre of the Focolare to Syria: on the one hand the encounter with the peoples’ pain: the wounds, the traumas, the despair, the concern for the future, especially for their own children; and, on the other hand, the desire to continue to hope, to take up their lives again with freedom. Both realities are supported by a spirituality centred on a faith that can say: we believed in love. 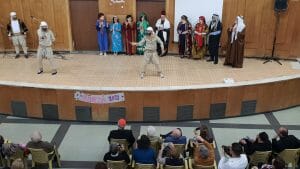 This life that unfolds between despair and hope, between death and resurrection, also resounded in the brief intervention given by the apostolic nuncio in Syria, Cardinal Mario Zennari and in the answers of Maria Voce and Jesús Morán.

Cardinal Zennari invited those present to welcome the message from 800 years ago, that St. Francis heard addressed to him by the Crucifix – “repair the Church.”
The Cardinal added,” But here, it is not just a question of repairing the Church, but of repairing your homeland. It is a question of building a new Syria.”

Jesús Morán, co-president of the Focolare, presented to the Syrian community of the movement the example of Mary, the mother of Jesus, who in the greatest desperation “believed in the impossible” and that is, in the strength of the resurrection. 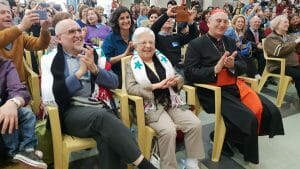 But what should they do today in Syria: stay or leave? Maria Voce addressed this fundamental question asked by so many. She pointed out that beyond this choice, which is certainly not easy, there is the issue of living the present moment. She invited those present to seize the moment, to focus on whatever in the present moment seems to be “the will of God,” and then “to live it with authenticity and consistency – even if God occasionally allows us to continue living in mystery.”

The day ended with a big celebration. Many different regions were represented and there were large numbers of children and young people present. This might have aroused some confusion in those who, perhaps, had come there thinking they would be meeting people of great poverty. Perhaps there is very little material well-being among them, but there is also a great wealth of life, of traditions, of customs, of dances, of songs, of expressions of joy and of the desire to live.

How beautiful these people are, who, despite everything, believe in love!