Lebanon: a message that continues

The Focolare president and co-president returned to Lebanon where they celebrated the fiftieth anniversary of the Movement with the community and various civil and religious leaders.

It sometimes happens that the great currents of history are concentrated in the small history of an individual. This happened on Saturday, May 11, during the meeting of the members of the Focolare movement in Lebanon, on the occasion of the fiftieth anniversary of the arrival of the Movement in the Land of the Cedars. In front of the 450 who were present, the presenters had just retraced some of the main stages of those 50 years, when one of them announced: “In the war from 1975 to 1990 my brother died. I was one of those who had a weapon in his hand. Then in 1993 I met the Focolare and the spirituality of unity changed my life.”

These few words are a concentration of reality: there is the richness and beauty of Lebanon, the gateway to the Middle East, where three continents and three great religions meet. They say it’s a country that’s been privileged by history. That it lives out the continuous challenge of fraternal coexistence among peoples, religions, Christian rites and denominations. It is referred to as a nation that never gives up and that always finds new resources to start again. This presenter’s announcement expressed the drama and the trauma of a war that lasted 16 years, a war whose origins and roots have never really been addressed.

Hidden within this one individual’s story is the seed sown by the first men and women members of the Focolare who arrived in Beirut in 1969. Their witness of a life based on love has not only survived the war but it is manifested in the various expressions of the Movement and in the many ecclesial and social activities that are presented on this day of celebration. 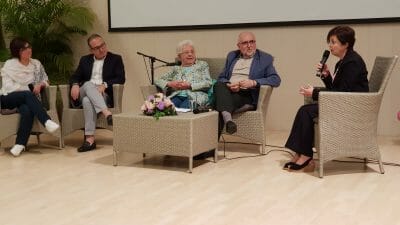 Maria Voce and Jesús Morán, president and co-president of the Focolare, who came to celebrate with the Lebanese community, were not satisfied with a jubilee that started with the past and arrived at the present. In their answers to questions, they challenged the Lebanese Focolare community to look to the future and to never tire of announcing the Gospel in the style that’s typical of the charism of unity – which means, like Christ, to make themselves one with everyone. They encouraged them not to avoid the differences and conflicts that could challenge their own cultural classifications, but to reach a new evangelical mentality. They encouraged them not to live a superficial witness to ecumenism, but to live a true unity in the diversity of rites and denominations and before ecclesial authorities. They asked them to live inter religious dialogue – especially with Muslims – the way that Chiara Lubich lived it. In this way the prophecy inherent within inter religious dialogue would become manifest. 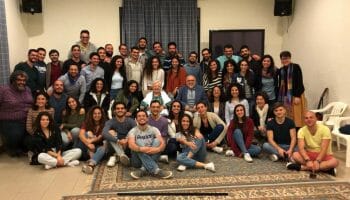 Maria Voce summarized all these challenges in her greeting after the Mass on Sunday, May 12th, the official act with which the fiftieth was celebrated. In the Resurrection Cathedral at Antélias near Beirut, Maria Voce expressed the wish that Lebanon’s people could withstand any fragmentation. This way Lebanon could be a living ‘message’ of coexistence and fraternity throughout the world. This is the special characteristic of the Lebanese people that Pope John Paul II perceived in the 1980s. He saw that in Lebanon cultural and spiritual diversity could be found in the journeys of individuals and of peoples. Maria Voce repeated the words of the Pope, who is now a saint:

“Lebanon is more than a country, it is a message of freedom and an example of pluralism for the East and the West.” (1)

The 50 years of the Focolare in this country show that the spirituality of unity has the capacity to keep this message alive and up to date.

(1) John Paul II., Apostolic Letter to all the Bishops of the Catholic Church on the situation in Lebanon, 7 September 1989.