A small seed with overwhelming strength

Maria Voce and Jesús Morán continue their journey in Lebanon: the roots of a culture in a country with a very complex social, political and religious situation. The challenge of an authentic dialogue as a key to Lebanon’s rebirth.

“It’s time to build a new nation”, said a large poster overlooking the motorway, but the speed of the Lebanese traffic did not give one the chance to find out who published this appeal and the intentions behind it. 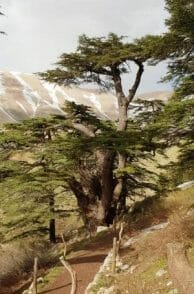 The members of a small Focolare delegation, headed by Maria Voce, its president and Jesús Morán, its co-president, were returning to Beirut from a trip to the north of the country. There, they visited the Valley of the Saints, the spiritual centre of the Maronite Church, the largest Christian denomination in country. This area is also well known for the Cedars of Lebanon, a small forest at an altitude of 2000 metres where one can still find species that probably date back to the time of King Solomon, that is 3000 years ago.

The members of the delegation were so impressed by the richness they discovered during this visit, that on their return journey to Beirut they affirmed the great capacity of this people, who can boast of 7000 years of history.

The Lebanese managed to survive at the crossroads of three continents and three great religions and to safeguard their creativity in extremely difficult conditions. As they approached nearer to the capital city, they thought more of the country’s present situation, that leaves very little space for hope. In Lebanon, there are currently 18 religious communities. The state and public administrations function on “emergency” management. Ethnic, religious and political groups, big families, economic interests and foreign powers are deeply intertwined. Wounds, caused by the so called “civil” war, that took place between 1975 and 1990, have not yet healed.
One of the bishops they met during these days said: “We haven’t had the courage to face the harm we have caused to one another, so no one has ever asked for forgiveness”. Comments show the fear of another outbreak of war. 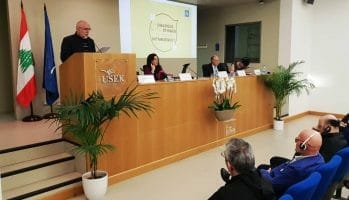 “It is time to build a new nation”, said the poster on the motorway. This provoked a very spontaneous question: how can this ever happen? Jesús Morán answered this question during a round table conference held at the faculty of Philosophy at the Holy Spirit University (USEK) near Beirut. His answer could be summed up in one word: dialogue. The Co-President of the Focolare Movement insisted: “Dialogue is part of man’s nature. Through dialogue man becomes more man; he fulfills himself by giving himself to others. It is not so much a matter of words or thoughts but of giving oneself. This requires silence and listening; it requires risking one’s own identity, even one’s own cultural and ecclesial identity. However, one’s own identity is not lost; it is enriched through one’s openness to others”. 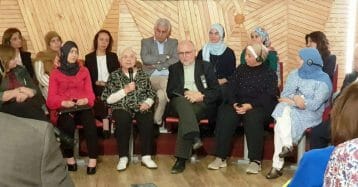 So, does dialogue build a new nation? Is this another one of those alluring theories that the Lebanese people have come across in recent years? The 150 Christians and Muslims gathered at the so-called “Yellow House” on May 13 can answer these questions. Located on the former demarcation line between East and West Beirut, the Yellow House was rebuilt as a historical symbol to remind people of the trauma of war. The testimonies shared by those gathered there were moving and convincing. They spoke of their friendship that began during the war when they were simply made welcome by the Focolare. A Muslim woman described how small gestures of closeness and attention, reciprocal visits and unbiased relationships transformed friendship into a real family.

“Dialogue is possible only between people who are true. And it is only love that makes us true”, Jesús Morán said in his speech. The Christian and Muslim friends and their experiences are a proof of this. May be it is just a small seed, that will grow slowly, just like the cedars of Lebanon. But it is certainly a seed with overwhelming strength, from which a new nation can be born.