Paradise ’49: an experience that shaped the Focolare Movement

The May-June 2019 issue of the New Humanity magazine is entirely dedicated to the mystical experience that Chiara Lubich had in the summer of 1949: this is now known as “Paradise 49”. We asked Father Fabio Ciardi, head of the interdisciplinary study centre, the “Abba School” and member of the steering committee for the publication of Chiara Lubich’s writings to explain the reasons for this decision. 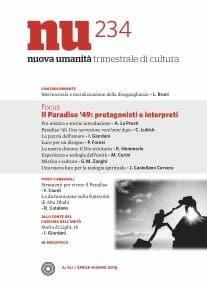 Father Fabio, in this issue of the magazine, there is a previously unpublished text by Chiara Lubich from 1969 that refers to the period of spiritual contemplation lived twenty years earlier and there are also articles by protagonists and witnesses from this time. Why did you decide to write about this now?

Seventy years have gone by since the summer of 1949 and it deserves to be remembered by our magazine. We have given space to Igino Giordani, Pasquale Foresi, Klaus Hemmerle, Marisa Cerini, Giuseppe Maria Zanghí and Jesús Castellano because they were the people who worked most closely with Chiara, reading and studying her writings from that period. They were part of that circle of scholars, the “Abba School”, that Chiara wanted around her precisely to help her to bring out the doctrine inherent in the experience of 1949. Their academic contribution is very clear in the articles that we include in the magazine, many of which are being published for the first time. At the same time their personal experience with Chiara also comes to light: they have been profoundly transformed by this. In this sense they are truly witnesses and protagonists of Paradise 1949. We have chosen them also because they have finished their earthly “holy journey” and we believe they are in that Paradise which is the focus of study for many people.

For a long time there was a great deal of confidentiality regarding the period called Paradise ’49 and only recently did we begin to publish texts related to that time. Why?

Because Chiara had the right to her own intimacy. It was a very profound and personal experience of God, even if from the beginning it was shared with those who lived with her. How many mystics have their writings made public before their death? It took 500 years to know the diary of Saint Ignatius of Loyola. There was also the danger that Paradise ’49 would be misinterpreted. Like any mystical text it needs to be introduced and, more importantly, the experience has to be shared by recreating the same conditions that gave rise to the event: otherwise it could remain just eloquent words. At that time, there was also a certain diffidence towards such a new Movement that included men, women, clergy, members of religious communities……. especially since it was led by a woman.

That period of vision and understanding was very important for Chiara Lubich and for the development of the Focolare Movement which had only just begun at that time. Can you tell us more about this? And what is the significance of these texts today?

The fact that those writings were not published in full did not prevent the experience they expressed being shared with others enabling them to live it too. Chiara Lubich has always been inspired by these writings in her teaching, sometimes citing them explicitly, even without indicating their origin. The entire Focolare Movement has been constantly nourished by the light that has sprung from that experience, indeed it has been shaped by it. We already have Paradise ’49 within us, more than we can imagine.

Those texts mark the beginning of the entire Work of Mary – with its many expressions of life and its social and cultural initiatives. They are also a prophecy that still demands to be fulfilled in that they offer a vision of God’s plan for humanity and they point the way to his incarnation. During a time of bewilderment and uncertainty like the one we are currently experiencing, Paradise’49 can help us rediscover the profound meaning of our life, of the life of the Church, of society, of the whole cosmos, and direct us towards its fulfilment.