Jews, Muslims, Hindus, Buddhists and Christians, members of Chiara’s family, got together for the first time and spent a week together.

Liridona is a Sunni Muslim from the North of Macedonia. She was asked to share her experience during an interreligious meeting for youth when Pope Francis recently visited her country. She spoke about her experience with other Christian and Muslim Focolare youth, and at the end she asked the Pope: “Am I dreaming too much?”(1)

Liridona, who was at Castelgandolfo from 17 to 23 June, discovered that others shared her dream. She was there with a group of forty people who follow 5 different religions and come from 15 different countries.

A team of people, responsible for interreligious dialogue at the Centre of the Focolare Movement, welcomed these members of Chiara’s family, and the first item on their programme was a visit to the chapel where Chiara Lubich is laid to rest. (2) There, Vinu Aram, the Indian leader of the Shanti Ashram Movement, sang a song through which she expressed the love of all of them, a love that binds them to the “source” that has changed their lives. 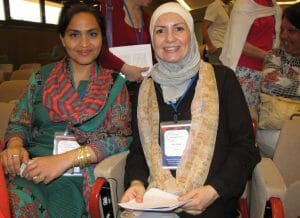 And Dr. Amer, a Muslim, professor of comparative theology shared: “I come from Jordan, where the Jordan river flows and reminds me that our journey starts with the purification of the soul. Very often I wonder why radical extremism incites people to kill others and themselves. I ask God for the courage needed to give our life for what is Good, to be witnesses of this love among us and to all”. 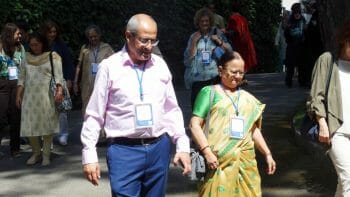 One fourth of the participants were younger than 35 years. Among them, there were Kyoko, a Buddhist from Japan; Nadjib and Rassim, Muslims from Algeria; Israa and Shahnaze, Shiite from USA and Vijay, a Hindu from Coimbatore.

They lived days of “prophecy” while they delved deeply into the mystical experience of summer 1949.

Shubhada Joshi, a Hindu, related: “The first time that I heard someone speak of “Jesus Forsaken” I was going through great suffering and I could not manage to understand. I started to look at him as the other side of the coin of love. Now I understand my tradition in a better way”. 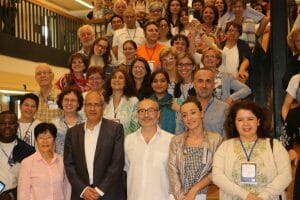 On the fourth day, another hundred people joined the first group who were participating in this “workshop”. These were mainly Christians involved in the Movement’s journey of fraternity

The message delivered by Msgr. Ayuso Guixot, the new President of the Pontifical Council for Interreligious Dialogue expressed a sign of profound “harmony” with Pope Francis’ work. When Rita Moussallem and Roberto Catalano spoke about this dialogue in the teachings of the last Popes, they highlighted the openness and prophetic spirit of Vatican II.

Although each participant arrived for this meeting with a bagful of one’s own experiences, they discovered that sharing with brothers and sisters of various faiths is “the best school”; they experienced a “presence of God”. They realized that this goes beyond dialogue and that they can look ahead together.
Hence the need of training and change.

After all, Pope Francis told Liridona that we need to “become expert carvers of our own dreams (….) with concentration and effort, and especially with a great desire to see how that stone, which no one thought was worth anything, can become a work of art” .(3)

(2) In the chapel, at the Focolare Movement Centre at Rocca di Papa, one finds Chiara Lubich’s tomb and those of the two co-founders of the Work of Mary: Igino Giordani and Fr. Pasquale Foresi