Art and dance in the footsteps of St. Francis

Young writer Andrea Cardinali shares about the fourth Harmony Among Peoples summer camp for kids, held in the Holy Land in July. This story is both his personal experience and that of a country which, perhaps more than many others, has the ability to touch the soul. 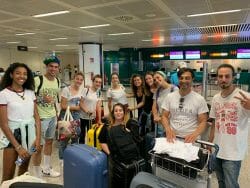 Sometimes you live everything so intensely that there’s no time to question – that stage when people ask themselves about why things are, where things are headed, and the meaning of it all. That’s not necessarily bad – quite the contrary.

This can particularly happen when you spend most of your time with children who have yet to understand that they are “prisoners” in their own birthplace, Palestine. And the fact that there is no time to question is not a symptom of a lack of reflection.
Some trips, perhaps the greatest ones, work like that—you say a somewhat ignorant “yes”, take off and go all in to the full adventure. You can’t even think of what it might mean from outside looking in; you are so beyond yourself that you go through it and find meaning within. 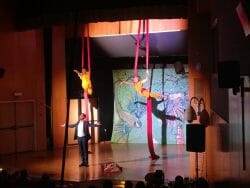 I was in Palestine for 18 days, having been dragged there by Antonella Lombardo and the brilliant girls from the Dance Lab at Montecatini School (Italy), some of whom I had met at the unforgettable “Let’s Bridge” Genfest in 2012.

“Harmony Among Peoples” began in 2005, with the idea to use art and dance as tools to unite peoples and cultures. 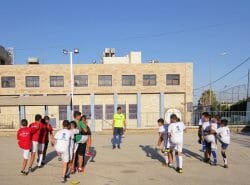 After various editions in Italy and workshops with youth from a number of countries, some years ago the “Children Without Borders” project began, thanks to a collaboration with Father Ibrahim Faltas. This summer the fourth edition was held in Palestine, and I was the newest addition to this band of artist-educators.

Together with Luca Aparo of Sportmeet, we also took a sports angle. We know that sports are just as important to learn how to enjoy while respecting all kinds of diversity.

After two weeks of artistic workshops we opened with the children on July 14 at the Notre Dame Theatre in Jerusalem, and on July 16 at the John Paul II Foundation in Bethlehem. It showed the historical meeting between St. Francis of Assisi and the Sultan of Egypt, Malik Al-Kamil, which happened 800 years ago in 1219.

To enhance the two evenings, singer Milad Fatouleh also performed with us. He is known in Italy for Una stella a Betlemme, which was voted best foreign song at the 2004 Zecchino d’Oro.

There were many political and religious figures who attended the two shows, which celebrated the meeting between Christianity and Islam. It was a prophetic sign of interreligious dialogue and possible peace.