Jenny and Javier: A Calling in the Amazon Rainforest

Only weeks before the Pan-Amazon Synod, Gustavo E. Clariá traveled to a Peruvian village in the Amazon rainforest. He tells the story—not of fires, deforestation, oil companies, or precious-metal seekers—but of Jenny and Javier, who chose to live in the South American Amazon with the desire to bring, as a family, the light of the Gospel to “poorest of the poor.” 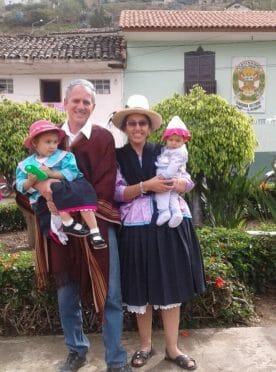 “From Argentina, we decided to move to Lámud, Peru,” said Javier, “the town where Jenny was born, in what is called ‘Ceja de Selva’ (half jungle, half mountain). It’s located near to where the great Marañón and Amazon rivers begin. We wanted to be close to her parents, who are now elderly and in delicate health.”

Javier is Argentinian. He met Jenny while she was studying in Rosario, Argentina. They have three daughters, aged 2, 4, and 17. They sold “what little they had” and left for the Amazonas, Peru’s poorest region, 1,600 kilometers from Lima and 14 hours from the nearest Focolare house.

At a young age, both Javier and Jenny met the Focolare’s spirituality of unity; they now wanted to live the Gospel as a family. That’s why “their biggest concern” was to get to a place where they “would be alone,” with no one with whom to share this ideal of unity. They decided to do everything they could to bear witness and proclaim the Gospel with their lives, so that even in the Amazon, a seed of the spirituality of unity would be planted.

They decided to live the commandment of reciprocal love so that Jesus would always be spiritually present in their family, according to his promise: “Where two or three are gathered in my name, there am I in their midst” (Mt 18:20). With the conviction that, as Chiara Lubich once said, “one of the fruits of Jesus in the midst is giving birth to a community,” they left for Peru.

A few days after arriving, the local bishop visited their town. They introduced themselves as a “Focolare family.” The bishop blessed them and encouraged them to continue in their commitment. They began by touring the periphery of the village by visiting “the poorest of the poor.” They went to people’s houses—if you want to call them that—where they found elderly people who “didn’t even have a decent bed to die in, such was their poverty!” They met many families and children who could afford to eat only once a day. “We would bring them something to eat, hug them, look them in the eye, and give them a word of encouragement,” said Jenny. Sometimes, they would stay two or three days with them, “sharing their pain, their poverty, their brief joys and hopes.” 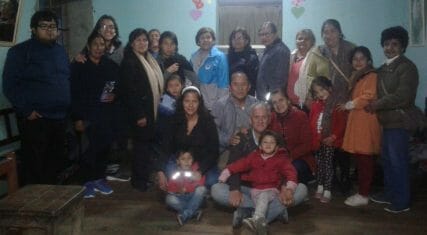 Hopeful that they could help bring to life a small community in their town, they began to organize meetings of the “Word of Life,” but with no success. They changed tactics several times. “We never got discouraged,” said Javier. “We knew that Jesus has his time and the important thing was to stay in the game.” They invited their neighbors again to meet about the Word of God, and gradually some people joined, including some of the mothers of the children in kindergarten with their daughters. They also organized a children’s program. This felt like the beginning to them, a small calling. Then the parish priest asked them to take on the family catechesis of the village and ten other surrounding villages, including some located two hours away.

Recently welcomed their first visit from the Focolare community of Talara, a city located 650 kilometers and 12 hours by car from Lámud. It was a visit that marked them in a special way, “a before and after in the life of our community.”

Jenny and Javier share in the joy of those who have found their place in the world. “We are few, but something was born!” they say. “We don’t want to set expectations, but we believe that Jesus has a soft spot in his heart for the Amazon, for the poorest of the poor. This is so perhaps because he was also born among the poor, and he stayed with them. We don’t know the roads he wants to take us, but they’re the only ones on which we want to travel! Like Him, we want to give our lives for our people.”