Telephone calls to the world

300 telephone conversations made by Chiara Lubich during conference calls with Focolare communities worldwide have been edited into one volume. Maria Caterina Atzori, one of the steering committee members entrusted with the “Works of Chiara Lubich”, at the Chiara Lubich Centre in Rocca di Papa (Rome), is interviewed about this book.

Conversations is the second volume in the series “Works of Chiara Lubich”. The first volume, “Words of Life”, was published by the New City Press, in collaboration with the Chiara Lubich Centre, in 2017. Can you tell us more about this second volume? 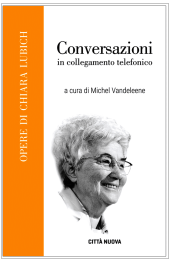 In the book “Conversations” there are 285 spiritual thoughts, which Chiara Lubich wrote between 1981 and 2004. She shared them personally with Focolare communities in various parts of the world during telephone conference calls made from time to time. These rich thoughts speak about life and delineate a spiritual journey in its various stages, lived in the light of the charism of unity. Chiara traces a path to collective holiness, one that opens a new road marked by its communitarian dimension and that leads us to God “together” with our neighbour. She was the first one to embark on this journey, but at the same time she was joined by those, who were led by her example and guided by her “telephone calls”. They accepted her invitation to set out together on this “Holy Journey” of life, an expression Chiara used to define this journey which recalls Psalm 83.

Has Chiara Lubich created a “new literary genre”?
Chiara had no intention of creating a new literary genre. In fact, the texts in this volume were not meant for a written publication. This came later on. Initially, New City Press published them in small booklets, as they were widely requested not only by Focolare members, but also by others who met the Charism of Unity.

These texts were written one at a time; they were written to be “spoken”, to be transmitted through the use of the telephone set. The novum of their “literary genre” lies in the fact that during each telephone call the speaker managed to create an immediate dialogue with her listeners; she formed a family worldwide, a family united in its commitment to walk the “Holy Journey” of life together. Later on, these same texts were put together for publication.

So, in this sense, one can say that “Conversations” brought to life a new literary genre: a genre that combines word, communicative methodology and life, and establishes an intimate and profound dialogue between the author and her interlocutors, in a broader sense between broadcaster and listener, writer and reader.

What are the characteristics of these texts?
The text of each telephone call is presented in the book as a letter. Although each one is contextualized in time and space, yet it is still aims at establishing direct contact with its new readers, who are addressed with the opening words: “Dear all”. These “conversations” are still happening, not through the telephone set but through the pages of a book.

Chiara uses a language rich in warmth and colour; that goes well with both young and old, people from different social backgrounds. From time to time, she engages in contemporary reality, interprets man’s life in the light of the Charism of Unity, recounts her experience about the thought she wants to transmit, interacts with her interlocutors, proposes a motto to be lived till the next telephone appointment (in the book: till the next letter). She expresses her spiritual thought through concrete daily images, familiar to her interlocutors. Frequently, she uses similarities, metaphors and slogans that are lively and easy to remember. Thus, her message is clear, engaging and “easy” to live. And each of these texts continues to invite the reader to live the message.

We have been told that the “Opera omnia” (the complete work) of the Focolari foundress is to be published in a series of volumes. The first one was “Words of Life”, and now we have the second one. May we know what are the next scheduled publications?
We prefer to speak about “Opere” (works) rather than about “Opera omnia”. In fact, the documentary material signed by Chiara Lubich is very substantial and there might be further acquisitions. This material needs to be sorted out and catalogued, a process that takes quite a long time. However, we already have the possibility of editing a corpus of works, drawn from both published and unpublished material, that offer the legacy of her thought in a systematic way. The series “Works of Chiara Lubich” is to meant to achieve this.

It will consist of 14 volumes, organized into three main thematic areas:1.The Person; 2. Spirituality (the first two volumes published by New City Press, Words of Life and Conversations, are part of this second section); 3. Work (the next volume, which will contain speeches in the civil and ecclesial spheres, falls under this third section. It is work in progress, expected to be finished within the next year).