Slovakia: I became an actress to make you happy

The story of Dorotka and her family

“An eXtra Something” is a film telling the story of Dorotka, a teen from Bratislava, Slovakia. She has Down syndrome, a genetic anomaly. Despite the difficulties this brings, it soon proves to be an “added value” for those around her. Her mother Viera explains what happens at the heart of a family when they learn they are expecting a child with Down syndrome. 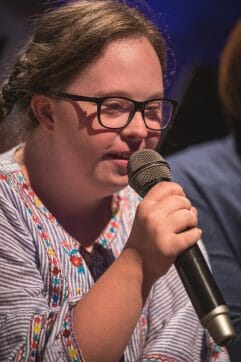 “It was a shock! We didn’t expect it that and we had never even seen someone with Down syndrome before. But Dorotka looked just like our other four children. We knew that panicking about an unknown situation doesn’t help, although keeping a cool head does. “Yet secretly, somewhere in my soul, I was afraid we would not be able to love her. In the time that followed, extraordinary things began to happen. Many precious people came into our lives, they helped us a lot, and they still help today. And our relationships in the family have become stronger. Our four older children have become more sensitive, loving, and the whole family is united as never before.”

How does feeling surprised change to feeling gifted?
The name Dorota means God’s gift. She already had this name during the pregnancy, and we believed that God never gives bad gifts. We just received something we don’t understand yet, and we felt it was a little test of our trust in God. At the time we began to hear many ideas and reflections, in which we sought God’s will in the present moment. It helped us a lot, as we clearly felt that this was God’s will for us. A friend of ours sent us a note that read, “This is true happiness, because it is built on pain”.

How did you decide to share your experience with other families?
Early on a doctor introduced us to other families who had children with Down syndrome. Together we did different therapies, we shared our experiences and eventually established an association called “Up-Down Syndrome”. We longed for the children to grow together, so that they were not only attached to their own family, and prepare them so that they can continue together on the road to some independence. We then founded the “Dúhadlo“ theatre, which opens new horizons for children through drama therapy.

How did the collaboration with the University of Bratislava begin?
A friend of ours teaches medical ethics at the Faculty of Medicine. Nine years ago she invited me to tell our story to students and get them more acquainted with the Down syndrome diagnosis. I am very grateful to have had this possibility. We felt that young doctors could still be influenced positively, and over the years we have always had positive feedback from students. 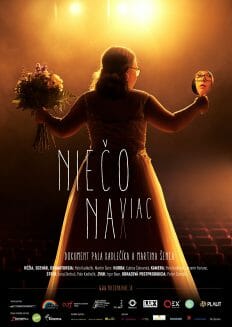 “An eXtra Something” is the name of a documentary film that tells the story of Dorotka in her daily life, her joys and struggles. Why this title?
Our original intention was to make a short video for World Down Syndrome Day. Pavol Kadlečík had no experience with Down syndrome and was so amazed that he decided to make a longer film. None of us knew that such a beautiful documentary would eventually be produced. Down syndrome is a genetic disorder in which the 21st chromosome does not form a pair, instead it forms a triplet. Therefore, this diagnosis can also be called Trisomy 21. This means that these people have one extra chromosome, and often it is called the chromosome of love. There’s something extra in them, and they have this special ability of unconditional love.

There is no fiction in this film. It shows the daily life of the main character and her family, classmates, friends from theatre and music, and includes the struggles, joys, successes and disappointments. It bears witness to the love in this family and their “yes” to life.

Dorotka, did you enjoy shooting a movie about you?
When I was standing in front of the camera, sometimes I was a little anxious, and I had stage-fright. It was hard not to look directly into the camera. But the cameraman was great, and I enjoyed it. Palko made everyone happy with the idea of this film, and I would like to continue with a new one.

What would you say to people reading this interview?
I became an actress to make you happy. Try to love others.