“In a divided world, united in Christ” was the title of an annual meeting, which for the past 38 years has been bringing together bishops from various Churches. This ecumenical event, from 21st to 25th October, has been termed historic for the island of Ireland.

“Powerful reflections across the ecclesial spectrum on witnessing hope in division. Prophetic … Holy Spirit breathe!” This tweet from Darren O’Reilly, co-leader of the Koinonia community based in Belfast, gets right to the heart of some exceptional days, between 21st and 25th October in Northern Ireland, for the 38th meeting of Bishops from different Churches, friends of the Focolare Movement. This year’s focus was on sharing reflections and testimonies on the challenge of unity in Christ, in a world as divided as it is today. 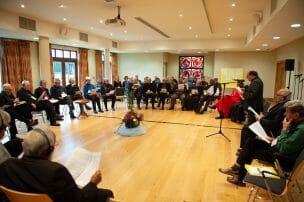 These meetings, promoted by the Focolare Movement, offer bishops a space of dialogue and sharing on the spirituality of unity. This year 30 Bishops, belonging to 18 different Churches, from 14 different countries, were welcomed to the cities of Larne and Belfast. As every year, the location was selected for its symbolic meaning, this time for the “peace process”, an experience of commitment towards reconciliation within a divided society.

The participants got to know something of the history and current state of the ecumenical journey in Ireland. They could not but be impressed by the constructive relationships and noteworthy fruits they saw. Bishop Trevor Williams of the Church of Ireland, delivered a well-received presentation of the history of Christianity in Ireland, and afterwards commented, “It was heartening to hear the Bishops’ concern for our ‘unfinished business’ of peace building and their joy at witnessing so many activities undertaken by Christians from different traditions to heal the divide”. The local Catholic Bishop of Down and Connor, Noel Treanor gave a significant contribution by outlining the ecclesial, social and political panorama.

The Bishops visited significant places in the peace and reconciliation process, such as the East Belfast Methodist Mission, where they were welcomed by pastor Brian Anderson, currently President of the Irish Council of Churches. They participated in liturgical services in Presbyterian, Anglican and Catholic churches. In the Catholic church of St Patrick, in front of a congregation from different Churches, the Bishops witnessed to how they live the New Commandment of Jesus, renewing a “pact” among themselves: a solemn commitment to love the other’s Church as their own. This pact is always one of the highpoints of these meetings. 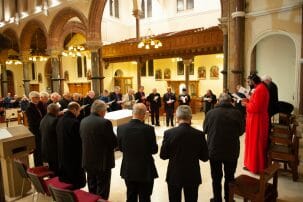 But it was in the afternoon of 23rd October, that an open session at Larne touched the hearts of many and has been termed “historic”. The Catholic Bishop of Limerick, Brendan Leahy, described it as such, “It was like the experience of the disciples on the road to Emmaus who felt their hearts burning as Jesus was among them and explained and talks with them”. Over one hundred people participated from all over Ireland, from many different Churches (Apostolic Armenian, the Church of Ireland (Anglican), Orthodox – Patriarchate of Antioch, Presbyterian, Catholic, Methodist, Moravian, Lutheran and Syrian Orthodox). The President of the Methodist Church in Ireland was there and a representative of the Moderator of the Presbyterian Church in Ireland, representatives of the Irish Council of Churches, the Irish Interchurch Committee, the Dublin Council of Churches, as well as different movements and groups.

The participation of Bishops from different Churches highlighted the fruits of the “dialogue of life” which was always encouraged by Chiara Lubich: a dialogue exercized by the people, including its pastors, a people united in Christ through the love lived by everyone. For example, the witness of true friendship in Christ and collaboration between the two Archbishops of Armagh, Eamon Martin (Catholic) and Richard Clarke (Anglican), both primates of all Ireland.

This “dialogue of life” finds expression in the commitment to address, in the most varied of ways, the challenges, social and civil wounds of Ireland. Such as “Embrace Northern Ireland” – assisting refugees; the “Four Corners Festival” – promoting encounters and friendship across the geographical and sectarian divides which still affect Belfast; the Dublin Council of Churches involving 14 Churches. Rev Ken Newell, a former Moderator of the Presbyterian Church in Ireland, described the meeting as a “new Pentecost, where Christians of different Churches from all over the world were one in the Spirit, where the unity of the Church was felt … for the well-being of the world”.