With the motto “Celebrate to meet”, the opening, next December 7th of Chiara Lubich’s centenary was announced to the press. The launching in Trento will inaugurate the international exhibition “Chiara Lubich world city “. 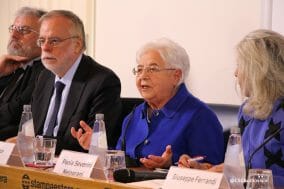 “Chiara is alive. She is alive in the spirit that she has given us, in the Movement that she founded and in the innumerable number of her followers, scattered throughout the world”. It is with these words that the president of the Focolare, Maria Voce, summed up the spirit with which the movement in the world is preparing to live 2020, the year in which the 100th anniversary of the birth of its foundress will be celebrated.

Chiara Lubich was born on January 22nd 1920 in Trento, a “pilot” city that will host many of the events of the centenary, including the one that officially opens the centenary on December 7th with an international exhibition at the Gallerie di Piedicastello. December 7th has strong symbolic meaning, because it was December 7th 1943, in the middle of the Second World War, when Chiara consecrated herself to God, giving rise to the “divine adventure” of her life and that of millions of people in the world.

During the press conference held on November 18th at the Rome headquarters of the Foreign Press Office, the President explained that the aim of the year of celebration – which has as its motto “Celebrate to meet” – is not to remember Chiara, but to “meet” her in her works, in the testimonies of those who have collaborated her, in the lives of members of the Movement, and in her “message of fraternity, unity and communion”.

A message that she “lived in her very person” by establishing relationships “with the most varied people in terms of culture, religion and ethnicity”, because she was convinced “that God is the Father of all and therefore that everyone is a brother/sister to one another”. A message of universal fraternity that today is more relevant than ever “for all the currents of particularisms and divisions, for the walls that rise, the borders that we try to build and that we instead try to break down and we are convinced that they can be broken”.

As we recall the 30th anniversary of the fall of the Berlin Wall, Andrea Riccardi, founder of the Community of Sant’Egidio, who was linked to Chiara by a deep spiritual friendship explained: “The adventure of sending focolarini to Eastern Europe was a contribution to the fall of the wall”

For Riccardi, Chiara is a “historical figure” with an unprecedented profile: “in a history of 20th century Christianity made up largely of men” and that “to women she left a few corners of mysticism or some experience of charity, Chiara was a woman who made history in the round: mysticism, charity, but also politics, change of life, passion”. “Unity is the key to understanding her existence, her search for peace, which is ecumenism,” he added, recalling her relationship with the Ecumenical Patriarch Atenagoras, and then affirming that, precisely as a woman and even though she was not a theologian, Chiara “understood more than the technicians of ecumenism”. In this world of divisions and small passions, which “suffers above all from a lack of vision”, he said quoting Saint John Paul II, “Chiara can be very unpopular” but her very vision can make humanity “flourish again”.

The prophetic value of Lubich’s message was highlighted by Maurizio Gentilini, historian and researcher, author of the biography “Chiara Lubich, the way of unity between history and prophecy”, soon to be published by Città Nuova. With respect to the acquisitions of the Magisterium of the Church, he observed, “Chiara is in profound harmony, 20 years in advance, with those that will be the insights and spirit of the Second Vatican Council”. Moreover, “after centuries of abstract hermeneutics, Chiara seems to give the Trinity an empirical value because she affirms that we are made up of relationships” and “God, who is Father, Son and Holy Spirit, who created us in his own image, has impressed on us this desire for communion”. In an age of individualism and the clashes of civilizations, she makes this desire her own and “translates it into the need for dialogue, which becomes the privileged way to contribute to composing the human family in fraternity”. In Gentilini’s analysis, Lubich anticipates the need for an outward going Church, which will find “a strong stimulus in Pope Francis’ Evangelii Gaudium”, and proposes the “criterion of love and mercy” as a guide to the application of every law, which will then be “the summary of Amoris Laetitia”. 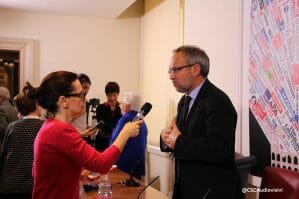 The exhibition that will launch in Trento the rich calendar of events on five continents – promoted by the Fondazione Museo Storico del Trentino and The Chiara Lubich Centre – in its title “Chiara Lubich, Città Mondo (World City) ” tells the story of the birth and spread of Chiara’s message of universal fraternity , which goes beyond the boundaries of that first city to spread throughout the world and reach other cultures, religions, sensibilities, but also those of the present time, to project into the future with renewed intensity. The choice of the place, moreover, is special, explains Giuseppe Ferrandi, director of the Foundation: they are two disused galleries made of asphalt and reinforced concrete, built in the heart of the neighborhood to divide the square from the cathedral. The encounter of this “suburban place” with Chiara Lubich and her message of unity “is formidable”. Details of the exhibition and upcoming events can be found at www.centrochiaralubich.org