RomaAmor: serving people in need as a way to building fraternity

A non-profit organization that has been operating in the Italian capital for thirteen years. It collects surplus or unsold food, prepares 250 meals a day for the poor and, simultaneously, works to promote social inclusion. 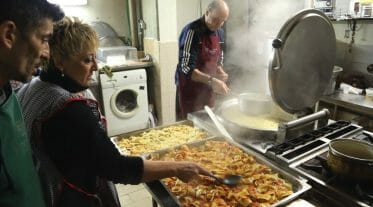 Over-buying food and consequent wastage are modern-day plagues that affect society in many parts of the world. However, there are also people who, silently, collect food that would otherwise be thrown away and give it to people who are most in need. They do so not only to offer immediate help to people who are hungry but also as a practical means of accompanying people as they rebuild their lives. This is what RomaAmor does. This is a non-profit organization that was founded by Dino Impagliazzo in Rome in response to the invitation of Chiara Lubich, who in 2000, receiving the honorary citizenship of the city, asked others to cooperate in bringing a “revolution of love” to the capital.

For 13 years RomaAmor has been offering 250 meals a day to the homeless people around the Tuscolana and Ostiense railway stations and in St. Peter’s Square in Rome. Dino is now 90 years old: serving others still fills him with joy. “There are sometimes many difficulties in helping others,” he explains, “you have to make sacrifices but then you feel a great joy for having done something worthwhile. Christ taught us that the essence of Christianity is to love God and our neighbour, and Chiara Lubich invites us to live for universal brotherhood: this is the foundation of our service to the poor.”

Dino received the International Carthage Award in 2018 for his longstanding service to the community because “his work increases public awareness and provides formation thus contributing to the ethical dimension of the city.” The project also “provides valid alternatives to the value attributed to people and material goods.”
The following is taken from an interview with Dino. 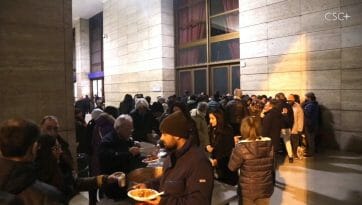 How did RomaAmor begin?
It began almost by chance. I started on my own by preparing a sandwich for a poor person I used to meet at the station, and gradually I thought of involving as many people as possible in doing something similar – my wife, people living in my block of flats or from my neighbourhood. We have always regarded our neighbours as our brothers and sisters irrespective of whether they were poor, healthy or sick or in trouble. We try to treat them as members of our family

For Food Day 2019, the Pope stressed the need for a return to sobriety in lifestyle and he spoke about the importance of cultivating healthy relationships with ourselves, our brothers and sisters and the whole of the created world…

It’s essential that we make this choice. You cannot reason in any other way if you are a Christian and know that each person is your brother or sister because Jesus has told you this very clearly: as a consequence, you live not only for yourself but in relation to others. You cannot think in any other way if know that among us there are people who are healthy and well placed and others who are sick and struggling. You must always be ready to help and do so with joy.

The “culture of waste” tends to dominate our society; you choose to serve the poor and needy and so you are going against the tide of public opinion…
This aspect of what we do is important, but we don’t just collect the food on its date of expiry, cook it and bring it to people in need. We also try to create relationships with them. That way we do more than just feed them. We try to adapt the meals to the people we help: children, the elderly, women, the sick have different needs, and for our Muslim guests we prepare meals without using pork. Our goal is also to promote inclusion: I invite volunteers to try to establish a close relationship with at least some of these people. When they offer the meal, I ask them to bring two trays, one for the person in need and one for themselves so they can sit down and eat together.

Is the group important?
It’s fundamental, we do everything as a team – decide the menu, cook and share tasks. One of us looks to see if there are sick people, someone else is busy in maintaining the link with the local authorities and we encourage one another. We spend a lot of time together: we start cooking in the afternoon, we finish at eight o’clock in the evening and then we go out for two hours. We share everything, both the joys and the difficulties.

Have any of the people you have helped become volunteers?
They certainly have! One third of the volunteers are foreigners who are living in reception centres and are waiting to be recognised as political refugees. Some of them are referred to us by social services. There are also the seminarians sent by the dioceses. We are from different backgrounds but all work for the same purpose.

What attracts young people to RomaAmor?
There are lots of young people who are volunteers – in fact, the number increases steadily. They come and are so happy that next time they bring their friends.