Care for victims is the priority in Albania, in the aftermath of the earthquake

The Focolare Movement alongside the many who have suffered loss and damage: “The life and needs of the person is at the center of our efforts. Listening, welcoming, sharing is what engages us at this time. But a great effort will be needed to plan the reconstruction”.

Solidarity continues with the victims of the earthquake that struck Albania on November 26th , 2019, resulting in 52 deaths, over 2,000 injured and considerable damage to structures. Almost two months since the earthquake, fundraising initiatives, commemorative events and aid interventions in the territory are engaging institutions, ecclesial and welfare realities. Once the emergency was over, all efforts are now directed to promoting the coordination of those working on the ground to plan and start the reconstruction. In the midst of current uncertainty, great comfort comes from feeling part of a family an extended network of people that ensures support and proximity. This is what lies at the heart of the Focolare’s active commitment. We heard from Fabio Fiorelli, a focolarino who lives and works in one of the centers of Tirana. 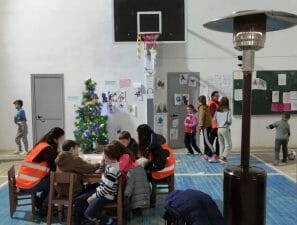 Since the night of the earthquake, what initiatives has the Movement been able to carry out in support of the people affected?
“Some of us have linked up with the national and diocesan Caritas by collaborating to prepare clothes and blankets for those who are homeless, and by going to the temporary shelters to listen to the people and play with the children. At the suggestion of the families belonging to the Movement, on December 21st we prepared an afternoon of Christmas celebration for the youngest children – and others – with songs, games, a ‘living’ crib and gifts from Santa Claus: a moment of serenity and communion so as to move forward. In addition, in Durazzo, a psychologist from the Movement, whose own house was damaged, collaborates with a team that reaches outlying villages that were very affected by the earthquake, where people live in tents and lack primary necessities. On a very practical level, a list has been compiled of the families of the Movement whose homes have been seriously damaged, our engineers have carried out inspections and cost analyses for repairs.

What other activities are you planning?
“A “project” has been drawn up with objectives and strategies to be undertaken in synergy with the United World Association (AMU), which is part of the Movement, and we are waiting for it to be implemented.
Immediately after the earthquake, during the emergency phase, Marcella Ioele, responsible for one of the Focolare centres in Tirana, together with others, reached Durazzo and the surrounding areas to give out help ,working with Caritas and the local Church and to give support to the victims. We asked her what experiences moved her , and the others with her, as they talked with displaced people:
“A young woman told me that when the tremors began, her brother, who was at home with the family, instinctively ran away to get out of the building, but immediately came back to take care of them. This gesture helped her to understand that in these moments she must not think only of herself but of those close to her. Another girl wanted to take action to help those in trouble, but having to assist her elderly mother she couldn’t leave. But – she told us – she could listen to and comfort the many who passed by, and she was happy because she felt she was giving her contribution in this way”.

How do people feel today?
“On the one hand people have to take responsibility for what collapsed , having authorized the construction of unsafe buildings and it is also clear that there is a lack of preparation for managing emergency situations. On the other hand, the solidarity shown in the initial phase by other countries raises the hope that a better Albania can start again from here. To see peoples working together , who until yesterday were separated by ancient hatreds, was a sign of hope. There is great gratitude especially towards the people of Kosovo came forward in a very significant way, almost as if they wanted to reciprocate the love they had received when they were here during the emergency in Kosovo. Some of them came to take families to their homes. The earthquake,” a young man told me, “brought us closer together than ever before. Others told us they could see the presence of God even in this reality of pain”.