Bishops “at the school of the Holy Spirit”

A message from Pope Francis and a greeting from Focolare President, Maria Voce opened a conference of 7 Cardinals and 137 Catholic Bishops, friends of the Focolare from 50 different countries. The meeting in Trento, Northern Italy is entitled “A Charism at the service of the Church and humanity”. 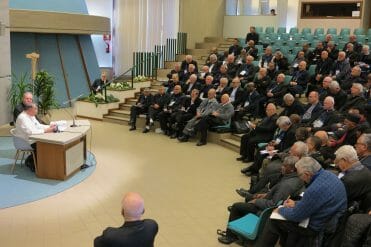 “It’s good for Bishops too always to go back to the school of the Holy Spirit”. This encouragement from Pope Francis on 8 February opened the international conference “A Charism at the service of the Church and humanity” in Trento. Taking part are 7 Cardinals and 137 Catholic bishops, friends of the Focolare Movement, representing 50 countries. In this centenary year of Chiara Lubich’s birth, the meeting explores the significance and contribution of the Focolare charism of unity at the service of the Church and of humanity.

On 6 February a delegation of conference participants had an audience with Pope Francis, who exclaimed, “You’ve brought me joy, go ahead!”

The Pope’s full message to the conference was read by Cardinal Francis X. Kriengsak Kovithavanij, Archbishop of Bangkok. Pope Francis affirmed charismatic gifts like that of the Focolare spirituality are “co-essential, together with hierarchical gifts, in the mission of the Church”. He continued, “the charism of unity is one of these graces for our time, which is experiencing a change of epoch and calls for a simple, radical, spiritual and pastoral reform that brings the Church back to the ever new and relevant source that is the Gospel of Jesus”.

Pope Francis went on to encourage the Bishops present to live the cardinal points of Chiara Lubich’s spirituality: commitment to unity, preferential choice of the crucified Jesus as their existential compass, making yourself one “starting from the least, from the excluded, from the discarded, to bring them light, joy and peace”, openness “to a dialogue of charity and truth with every man and every woman, of all cultures, religious traditions, and ideal convictions, to build up, in meeting with them, the new civilization of love.”, to listen like Mary from whom “we learn that what matters and what remains is love” and who teaches us how to bring Christ to the world today, Christ “who lives Risen among those who are one in his Name (cf. Mt 18:20)”.

Maria Voce, President of the Focolare Movement, sent a video message in which she underlined the fact that this spirituality aims to be, as proposed by the conference title, “at the service of the Church and of humanity”. In an era in which “We know that there are challenges for the Church all over the world, we are called to a new inculturation of the Gospel of Jesus,” affirmed the Focolare President. “An inculturation which treasures the experience of the past but knows how to express it anew, prophetically, in our times. For this reason we must also open up and discover the power for renewal inherent in many of the new charisms present in the Church today.”

Maria Voce continued, “ the reality of Bishops, friends of the Focolare Movement ” – affirmed the Focolare President – wants to promote “ a lifestyle of fellowship and communion with Jesus in the midst among Catholic bishops from all over the world – and then also among bishops of various Churches. Such a lifestyle contributes to making collegiality ever more effective and affective”.

The program continued with an afternoon visit to the “Chiara Lubich city world” exhibition in the Galleria Bianca of Piedicastello, in Trento. The bishops then attended a performance of “From the Tridentine Council to Tridentine Chiara”, a special artistic event at the church of Santa Maria Maggiore. From there, the bishops proceeded to Cadine Mariapolis Center for the celebration of Mass, presided by the Archbishop of Trento, Mons. Lauro Tisi.

On Sunday 9 February they were welcomed by the Archbishop of Trento to the city’s Cathedral to celebrate the 10am Mass, presided by Cardinal Francis Xavier Kriengsak Kovithavanij. This was streamed live on TV2000 and via the website www.centenariolubichtrento.it . It was followed by an official reception hosted by the Presidents of the Provincial Council Walter Kaswalder, of the Provincial Administration Maurizio Fugatti, and the Mayor of Trento Alessandro Andreatta.

From 10-12 February, the conference moves to Loppiano, near Florence, Italy, the little town of the Focolare Movement. In collaboration with the “Evangelii Gaudium Center” of Sophia University Institute based in Loppiano, there will be sessions on a range of current issues facing the Church and society today, involving reports, round-table discussions and dialogue. Topics include: “The Church and its currrent challenges” with historian and founder of the Sant’Egidio community Andrea Riccardi, “The Church becomes dialogue” focussing on the four dimensions of the life of the Church (kerygma, communion, dialogue e prophecy). With Cardinals and Bishops from so many different parts of the world, the input promises to be wide-ranging and dynamic.

Here is the text of the message of Pope Francis

Here is the text of the video message of Maria Voce