With a statement of March 1, the Organizing Committee of “The Economy of Francesco” has postponed the event to November. The Side Event, scheduled in Perugia for the end of March, will be postponed from 20 to 22 November. 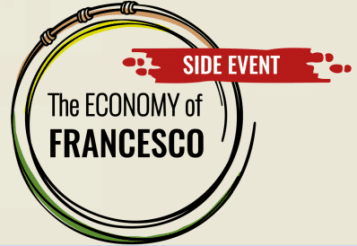 Why a parallel event?
When dealing with “appointments with history”, the mission in question needs to be supported in some way! Behind the CVs of the young people who responded enthusiastically to the Pope’s invitation there are not only brilliant profiles, innovative research and projects, but also the clear aim to redesign theory and practice of the economic system, working to reverse world trends, together. And this represents a global challenge much too serious and important for us to remain mere passive spectators.

Hence, the parallel meeting that will take place in Perugia from 20 to 20 November 2020 is an opportunity for all those who cannot participate directly in “The Economy of Francesco” (due to issues of age and logistics) but still wish to be part of this new process, closely following and supporting the work carried out by the under-35 gathered in Assisi.

Promoted by the Economy of Communion, the Side Event is essentially a space open to anyone who believes in the need for a different economy: an inclusive place, functioning as a spokesperson for multiple realities. In the awareness that the current economy often fails, since it can work well for some, but clearly does not work at all for (many) others, while also threatening the social and environmental ecosystem, we will dialogue between young and old, between different cultures and backgrounds, experiencing the event through 3 generative dimensions: feeling-conceiving-acting.

By alternating plenary moments with parallel / group sessions, we want to testify how important it is to let networks flourish, while learning from past failures and converting ideas into action. Under the guidance of a group of facilitators (similarly to what will happen in Assisi) and with the contribution of some important keynote speakers, which the young people in the Franciscan city will work simultaneously on 12 macro-themes, focusing on some contrasting key concepts, such as wealth / poverty and more.

As in the case with Assisi, the wish is that these days spent in Perugia will serve to bring together visions, desires, skills and commitment: both on an individual as well as a collective scale. Yes, because, more than profit, the economy is really about vocation and if you believe in something alternative, you need to make your voice heard, empowering it, by putting it in relation to the ideas of others. In order for it to turn into actual collaboration, thereby creating a spirit of community. A community capable of creating real impact, by starting a necessary process: this is the aim of the Economy of Francesco in Assisi, and this is the cause that the event in Perugia aims to sustain. But in order to achieve this objective, it is not enough to merely make words like ethics and sustainability become fashionable, taking a real step of discontinuity, while breaking away from what is currently the dominant line of thought, will also be required.

The Economy of Francesco will leave its mark thanks to its youthful nature, but it will be surrounded by a heterogeneous chorus of voices strengthening its opening of the passage, fertilizing this terrain of change together.