The Trinity as a model for relationships between generations

Maria Voce was one of the speakers at the International Conference of pastoral care of the elderly, “The Richness of Many Years of Life” 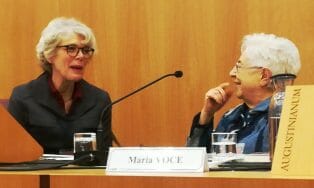 To cultivate dialogue between generations and establish a relationship of mutual love between youths and adults, we need to realize that the other person, in all his diversity, is a gift for me. And we also need to build fraternal relationships based on authentic listening, that puts aside stereotypes and prejudices and opens new pathways.

This was the core of the message offered by Maria Voce, the Focolare president, when she was invited to be one of the speakers who addressed the first International Conference of pastoral care for the elderly. This conference, that took place at the Augustinianum in Rome from 29 to 31 January, was promoted by the Dicastery for Laity, Family and Life. In the presence of an audience of about 550 experts and pastoral workers from 60 countries, Maria Voce proposed a reflection on dialogue between generations.

She said that in today’s current situation, one can notice that there is “an atmosphere of new understanding between generations” that reigns on a global level. She quoted the example of peaceful demonstrations that recently mobilized both young and old who joined forces to express their ideas and ask for a renewed commitment towards “common good, human rights, solidarity and peace”. The young people have been the promoters of a message of rebirth, while the more mature, driven by the enthusiasm of the younger ones, have chosen to share its challenges and commitment.

When speaking about the outcome of this allegiance between generations, Maria Voce quoted Chiara Lubich, the Focolare founder. Lubich related: “I would not hesitate to define as Trinitarian the relationship we had with young people from the very start. In our generation of adults we perceived all the weight, the value of incarnation and concreteness, while in the young generation we saw ideality, authenticity, revolutionary power and certainty of victory. The first generation seemed to us to be like the Father, while in the second generation there seemed to be the beauty and splendour of the Son, the Word of the Father. And between the two there was a relationship of mutual love, almost a current of the Holy Spirit that gives a great witness to the world”.

The Focolare President traced out various pathways that lead to this allegiance between generations. First of all, she underlined the need for deep listening, which means having “minds and hearts free from prejudices and stereotypes”. Then she spoke about the necessity of abandoning fixed concepts that depict the adult as boring and stuck to the past, and underestimate and judge the young person negatively. Finally, she highlighted the great importance of being open to new schemes to be able to overcome difficulties together.

Maria Voce concluded by re-proposing the image of the Church offered by a young man during the Synod dedicated to them: “The Church is like a canoe, in which the elderly help to keep its course by interpreting the position of the stars and the youth row hard while imagining what awaits them further ahead”.