After twelve years of presidency, Prof. Piero Coda, who has led the Sophia University Institute since its foundation, passes the baton to Prof. Giuseppe Argiolas, Professor of Management at the same Institute.

This is the first change of guard for the Sophia University Institute (I.U.S.), which also coincides with the attribution by the Congregation for Catholic Education of the title of “Rector” to the former Dean of the Institute. Therefore, Prof. Giuseppe Argiolas is the new Rector of Sophia. He succeeds Prof. Piero Coda who , since its foundation, has guided the Institute with wisdom and a spirit of prophecy.

The election by the Academic Council of the Institute,  took place on  January 9th.  On February 20th , 2020, the Congregation for Catholic Education, wrote  a letter,  appointing  Prof. Giuseppe Argiolas Rector of the Sophia University Institute for a four-year term. This morning, in the Aula Magna of the Sophia University Institute, the ceremony for the inauguration of the new Rector was held. 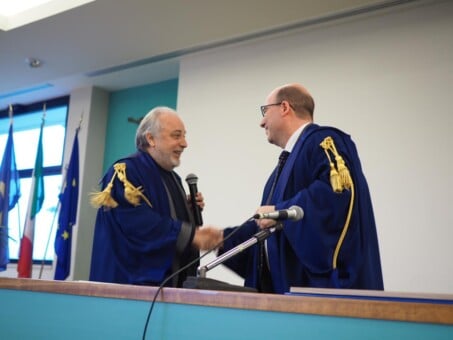 Argiolas was born in Cagliari in 1969. He has been a permanent lecturer at the I. U. Sophia since 2016, when he left his post at the University of Cagliari to dedicate himself to developing the  degree course in Management and to directing  the Institute’s Doctoral School. His research activity is mainly focused on  topics of Corporate Social Responsibility and Organizational and Mission-Driven Business Management (see Biography).

“First of all, I want to express my deep admiration for Prof. Piero Coda and a big thank you for what he has done so far – commented Prof. Argiolas – for my part, I will try to do my best to carry out the task entrusted to me, interpreting this responsibility as a service of unity”. He went on to say:  “The founding phase ends and that of consolidation and development begins with the generational transition. But the charismatic dimension must remain.  Sophia will continue to carry out, with creative fidelity, the mission for which it was founded by Chiara Lubich, travelling together with many companions – as Pope Francis told us – with always new  “joy, vision and decision the journey just begun”.

Professor Piero Coda, who leaves after twelve years of presidency, adds: “I am happy with this  new stage in Sophia’s journey which begins under the expert and inspired guidance of Giuseppe Argiolas, the fruit of constant and consolidated maturation at all levels. The appointment no longer as Dean but Rector by the Congregation for Catholic Education comes unexpectedly and is  welcome as a seal and further impetus. The occasion is propitious to renew with enthusiasm and joy with the Rector and with the whole academic community that pact of unity that qualifies the spirit that animates us and which is relaunched today with vigour by Pope Francis’ Global Compact on Education”.

Maria Voce, Vice Grand Chancellor of the Institute and President of the Focolare Movement, expressed her wish : “I am happy to renew my congratulations to Prof. Giuseppe Argiolas, the new Rector of the Sophia University Institute. His election undoubtedly marks a change of generation and of academic scope compared to the outgoing president. I am sure that Prof. Argiolas will bring you the gift of his personal characteristics, remaining faithful to the charismatic origin of the culture of unity and updating it to respond in the best possible way to the questions of the present time”.